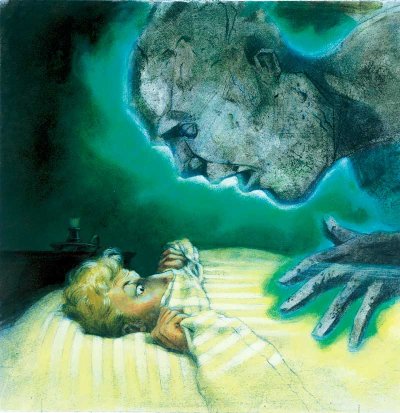 The Cardiff Giant was looming over the bed.

I unlocked the door and stepped into my new apartment. I had worked hard all day. I was tired. All I wanted to do was settle in before a cozy fire, read the evening newspaper, then crawl into bed.

I stoked the fire in the fireplace and eased into my favorite chair. In the newspaper I saw a story about the Cardiff Giant:

Crowds of people have been lining up to see New York City's own "petrified man" at the Eighteenth Street Exhibit Hall. They believe they are paying to see the stone giant that was discovered on a farm in Cardiff, New York. They don't know that the giant on display at the Exhibit Hall is merely a plaster cast of the Cardiff Giant.

Earlier this year, a Cardiff farmer was digging on his farm when he found the stone figure of a man. The stone man was over ten feet tall. Many people believe that an ancient tribe of giants lived in New York thousands of years ago. They believe the farmer in Cardiff discovered the fossilized remains of one of these giant men.

Scientists are now studying the Cardiff Giant. Many experts doubt that the figure is a petrified giant. They believe it is a statue carved from stone.

I laughed. "Some people will believe just about anything. In Cardiff, they were paying to see a stone man that is probably a fake. In New York City, they are flocking to see a plaster imitation of the fake."

At least now, though, I knew why the street outside had been so crowded. I lived across from the Eighteenth Street Exhibit Hall.

I climbed into bed. I was glad I had a scientific mind. I demanded proof when I heard far-fetched stories.

I closed my eyes and was drifting off to sleep when I heard footsteps in the hallway. These were not just any footsteps. They sounded like boulders being dropped on the floor. With each step, the whole building shook. After each step, I heard a clank, like somebody was dragging a chain.

I pulled my blanket over my head. I pressed it against my ears. It muffled the thumping and clanking, but I could still feel the building shake.

The shaking seemed to come closer. My blanket slipped off my shoulders. I tugged on it. Something -- or someone -- tugged harder.

I pulled the blanket from my face. A huge man loomed over me.

I screamed. The man screamed.

I stared up at the man. His head was the size of my duffel bag; his chest was as big as a barrel. His arms hung down at his sides like tree trunks.

His massive shoulders sagged. He looked so sad and lost, I forgot to be afraid of him.

I scrambled from my bed. The poor giant shivered.

The Cardiff Giant sits by the fireplace.

He stomped over to the fireplace and heaved his ghostly body into my favorite chair. Crr-ACK! The chair shattered beneath him.

The giant stood up and looked down at the sticks of wood scattered around him. "I'm sorry. I shouldn't have tried to sit on something so small."

He lumbered over to my bed and lowered himself down on to it.

Crr-INK! The metal bed frame squashed to the floor.

"Stop that!" I said. "You'll crush every piece of furniture I own."

The ghost struggled up from my flattened bed. "I'm sorry. I'm just so tired. I haven't had a chance to sit down for a very long time."

The giant sat on the rug. I wrapped a blanket around his shoulders. I turned my washtub over and set it on his head to keep his ears warm.

"Now," I said, "tell me why you're haunting my apartment."

The ghost sighed. "I didn't want to hurt you. I'm only trying to get some rest. My body is lying across the street. It's on display for crowds of people. I'm so tired. I want to go back to sleep, but I won't be able to until they bury my body again."

"You're the Cardiff Giant!" I said.

"The what?" asked the ghost.

I retrieved the newspaper and spread it open to the story about the giant. "Listen to this," I said.

I began reading the story. I skipped over the part about the scientists who did not believe the stone man was real. I did not want to hurt the ghost's feelings. His eyes grew wide as I read about the plaster imitation.

The ghost stared at me. "The stone man across the street isn't me?"

The sad ghost buried his face in his hands. "You mean I've been haunting this street for nothing!"

"Don't worry," I said. I reached out to pat his shoulder. "Go to Cardiff. That's where your stone body is."

The ghost rose to his feet. "I'd better get started."

He lumbered across my apartment and walked out the door. His footsteps thundered across the hall and down the stairs.

I glanced at the newspaper. The experts thought the stone man was a fake. I knew he was real. But the experts would never believe me. They would not believe my far-fetched story about talking to a ghost unless I gave them proof.

The Cardiff Giant walks out into the night.

I heard the ghost stomp out onto the street. I watched the poor ghost of the Cardiff Giant trudge away down the street. Then the ghost turned the corner and disappeared into the darkness.

Every place with a ghost claims to be "the most haunted." Find out the truly most haunted place in Illinois in the next story, "Haunted Cemeteries."