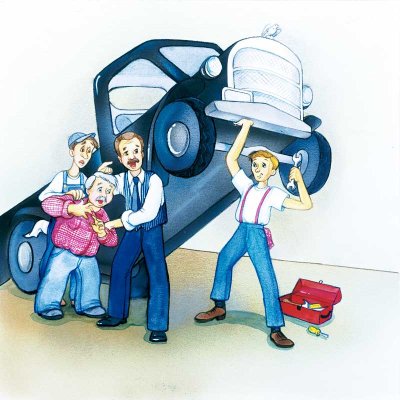 Tate was only sixteen, but had the strength of three men.

Riley counted his workers. Then he yelled, "Line up, men!" Riley was the foreman of a road construction crew. He had to make sure everyone reported for work. This morning he counted an extra worker, a teenage boy.

The boy stepped forward. "My name's Tate. I'm here for the job."

Riley studied the boy. He did not look healthy. He was skinny and pale.

"I can't have kids running around getting hurt," Riley said.

Tate worked hard all day. He never took a break. He did not stop for lunch. At the end of the day, Riley handed out pay envelopes to all the men. Tate put the envelope in his pocket and walked towards town.

The next morning, Tate reported early for work. He worked very hard all day, collected his pay envelope, then set off for home.

On Saturday, Riley went into town for a haircut and a shave.

"So how's the work coming along?" the barber asked.

The barber raised his eyebrows. "Is that so? What's causing your men to work so much faster all of a sudden?"

"It's not the men," said Riley. "It's a boy. I've got a new worker on the crew. He can't be more than fifteen or sixteen. Maybe you know him. His name's Tate."

"Oh, yes." The barber nodded. "Tate. He's an odd one, he is. And you're right -- he doesn't look older than sixteen. But he has to be at least twenty. Lived here all his life."

"You think that boy is twenty?" Riley asked.

"Why, yes," said the barber. "But the funny thing is, he doesn't seem to get any older. Once he got to be a teenager, he just stopped aging. He's even worn the same clothes for the last five or six years, and he never needs a haircut."

Riley frowned. "That's very strange. Think I should have a talk with him?"

Riley left the barber shop. Outside he saw two women, Mrs. Malloy and Mrs. Winslow, chatting in front of the dress shop.

But the women were too involved in their conversation to notice him.

"The poor boy will miss his mama," Mrs. Winslow was saying.

"Tate?" Riley wheeled around. "Pardon me. I don't mean to eavesdrop, but were you just talking about a thin, fair-haired boy named Tate?"

"Yes. His mother passed away this morning," said Mrs. Malloy.

"She's been sick for a very long time," said Mrs. Winslow. "Last week she took a turn for the worse. She kept getting weaker and weaker."

Mrs. Malloy nodded. "It's a blessing, really, that the poor old lady no longer has to suffer."

"But Tate will be heartbroken," said Mrs. Winslow.

"He adored his mother," said Mrs. Malloy. "He spent all his time caring for her. It's as if he had no other purpose in life. I don't know what will become of the poor boy now."

Jimmy and his friends spotted Tate by the creek.

"Slow down, Jimmy," said Mrs. Malloy. "Tell me what happened."

Jimmy took a deep breath. "We were playing near the creek. Tate walked by. He looked funny, he was even paler than usual. I could see right through him."

"We followed him," Jimmy said. "He went out past the old mill and down to the creek. Then he walked right into the ground."

"It's true," said Jimmy. "It was a cave. I never even knew it was there. Tate got paler and paler as he walked inside. Then he just disappeared. I've got to catch up with the other kids. They went to tell the sheriff." Jimmy raced down the street.

Riley laughed. "He has an active imagination. Tate is certainly pale, but I don't think he could actually disappear."

On Monday morning, Tate did not come to work. It was not like Tate to not show up for work. Then Riley remembered Jimmy's story.

Riley put the crew to work, then set out down the road past the old mill. He saw that the sheriff had gotten to the cave before him.

"I came to see if Tate was okay," Riley told the sheriff.

"You're too late." The sheriff pointed inside the cave.

There, right in the middle of the cave, was a skeleton. Tate's clothes and work boots were rotting in a heap around the brittle bones.

"That can't be Tate," said Riley. "He was working for me last week."

The sheriff found the skeleton in the cave past the old mill.

The sheriff nodded. "I've seen him around town, too. I'd say this skeleton has been here about five years. Funny thing is, five years ago is just about the time Tate stopped getting older. He started looking paler and skinnier. I found this in his pocket." The sheriff unfolded a piece of paper. "It's his mother's grocery bill. Paid in full. Tate always took good care of her."

"And he kept taking care of her even after he was dead," said Riley.

He pointed to the date on the paper. Tate had paid the bill on Saturday, the very day his mother died. "I guess he can stop taking care of his mother now," said Riley.

There's been a ghost haunting the same house for 300 years. Find out why in the next story, "The Wrecker's Daughter."