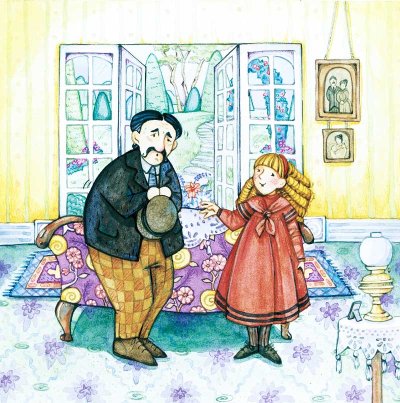 Vera smiles at Mr. Nuttel. "My aunt will join us soon," says Vera. "Until then, you must try and put up with me. May I take your hat and coat?"

Mr. Nuttel is a nervous man. He shyly smiles back at Vera. "Thank you," he says. He gives her his hat and coat.

"You just moved to the country?" she asks.

"Yes," says Mr. Nuttel. He fidgets with his hands. His eye twitches. "I moved here to benefit from country life. Country life is relaxing and slow."

"Do you know anyone in the country?" asks Vera.

"Not a soul," says Mr. Nuttel. "Your aunt, Mrs. Sappleton, is my first new friend." Mr. Nuttel takes a deep breath. His body shivers. "My sister, Olivia, lived in the country four years ago. Olivia met your aunt at that time. Olivia says your aunt is very nice."

"So you don't know anything about my aunt?" asks Vera.

"I only know her name and address," says Mr. Nuttel. "Is she nice?" he asks with a gulp.

"Oh, yes, very nice indeed," says Vera. "She is nice despite the tragedy."

"Tragedy? What do you mean?" asks Mr. Nuttel. He fidgets with his hands. His eye twitches. His body shivers.

"The tragedy happened about three years ago, since your sister was here," says Vera. Vera looks directly into Mr. Nuttel's eyes. "You may wonder why this window is open," she says.

"Pretty and tragic," says Vera. "Three years ago today, my aunt's husband, two brothers, and their favorite dog left through that window on a hunting trip. They never returned. They had gone hunting on the moors. When they crossed a moor, they fell into a deep bog and were never seen again."

"On the anniversary of their deaths," says Vera, "my poor aunt leaves the window open. She believes that they will return. And, you know, Mr. Nuttel, on such a lovely day as this, I sometimes think they will."

Vera's aunt walks into the room. "Mr. Nuttel," she says, "I am sorry to keep you waiting. I hope my niece has made you comfortable."

"Y-y-y-es," says Mr. Nuttel, his eyes looking quickly from Mrs. Sappleton to Vera to the window.

"I do hope you don't mind the open window," says Mrs. Sappleton. "My husband and brothers are hunting on the moors. They should return soon. They always come back through this door. I do hate how they track mud onto my carpets. Those moors are so muddy, you know."

Mr. Nuttel listens with horror. He fidgets with his hands. His eye twitches. His body shivers. Vera watches Mr. Nuttel.

"I-I-I see," says Mr. Nuttel, anxious to change the subject. "I am pleased to meet you. I will be in the country for a few months. I moved to the country for the benefit of my nerves. My doctor says I absolutely must relax. Country life is relaxing and slow, don't you think?"

Mrs. Sappleton turns from the open window. She looks at her guest. "Yes, it is, Mr. Nuttel," she answers. "And the hunting in the country is very good, too."

Mrs. Sappleton turns back to the open window. "I wonder how the hunting is today?" she asks.

The drawing room is silent.

Mr. Nuttel nervously tries to fill the silence. "My sister, Olivia, met you about four years ago," he says. "Olivia said the country would be very good for my nerves."

"Look! Here they are," says Mrs. Sappleton. "And they're back just in time for tea." The older woman walks towards the open window. She looks out across the green lawn. "Goodness! Look at all that mud. They will surely ruin all of my carpets today."

Mr. Nuttel cannot believe his eyes and ears. What a tragic situation. This poor Mrs. Sappleton needs more help than he does. Mr. Nuttel turns to Vera to show his sympathy, but the child is staring out the window. Vera's eyes are wide with horror.

Vera spies the hunting party returning from the forest.

Mr. Nuttel fidgets with his hands. His eye twitches. His body shivers. He turns to look out the window.

Far across the green lawn, a dog runs toward the drawing room. Following the dog is an older man with a shotgun resting on his shoulder and two young boys carrying sacks. Their boots are covered in mud.

Mr. Nuttel grabs his coat and hat. Without turning back, he runs from the drawing room and out the open window. He runs across the lawn and disappears from sight. In his hasty exit, he almost knocks over the returning Mr. Sappleton.

Mr. Nuttel runs out of the house without turning back.

"What got into that young man?" asks Mr. Sappleton. He steps on the clean carpet with his muddy boots.

Mrs. Sappleton shakes her head and looks at the mud.

"Such an odd, nervous fellow," Mrs. Sappleton tells Mr. Sappleton. "He fidgeted with his hands. His eye twitched. His body shivered. He talked all about his nervous condition. Then he left without saying good-bye. Very peculiar."

"He was probably frightened by the dog," says Vera. She bends to scratch the dog's head.

"Makes sense, really," Vera continues. "He told me that he was very scared of dogs. Several years ago he was hiking in the mountains. While following a dark and narrow trail, he stumbled upon a pack of wild dogs. The dogs chased the poor fellow for three days. Mr. Nuttel finally climbed up a tree and hid in the branches. Below him, the dogs walked back and forth, snarling and barking, for a whole week."

Vera sweetly smiles at her aunt and uncle. Vera likes to tell stories.

Sailors are known for the bravery. Read about sailors who've seen phantom ships at sea in the next story, "Flying Dutchman."