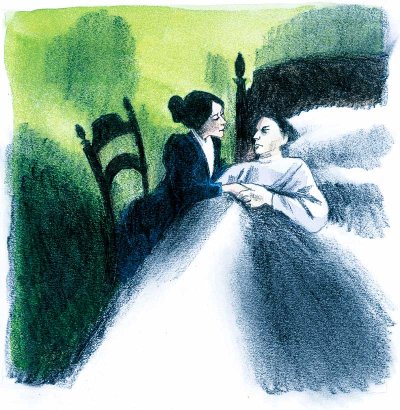 Houdini's last words were a coded message to his wife.

Harry Houdini was probably the most famous magician of all time. People especially loved Harry Houdini's great escape tricks. He was famous for putting himself in great danger and escaping just in time.

Houdini's assistants once wrapped him tightly in heavy chains. They locked the chains together and lowered him into a large pool of water.

People in the audience could see through a window in the side of the tank. Houdini held his breath for a long time. Just when the audience thought he would drown, he escaped! He wiggled out of the chains, floated to the surface, and took a deep breath. The crowd cheered.

Houdini performed hundreds of death-defying tricks like this one. But his most famous trick was one he did from the grave -- after he was already dead!

Bess Houdini saw her husband do many spectacular tricks before his death. She believed he would find a way to contact her and give her a message.

She kept a candle burning near a picture of her husband. Each year she held a séance on Halloween. A séance is when a group of living people try to talk to the spirits of people who have died.

In 1929, a man named Arthur Ford came to the séance on Halloween. He said he was a medium. A medium is a person who speaks all the words that spirits want him to say.

Ford held another candle in front of him. He closed his eyes and began to whisper and hum. His voice changed suddenly.

"Hello, Bess," Ford said in a very strange voice. The voice sounded just like Harry's voice, but this voice was far away. A cold breeze came through the open window and blew out a nearby candle. The table shook. Then Ford slowly said ten words: "Rosabelle...answer...tell...pray...answer...look...tell...answer...answer...tell..."

These were the exact words Houdini whispered to his wife on Halloween three years earlier. Bess was amazed. She believed her husband had reached out to her from beyond the grave.

Did Houdini really figure out a way to speak to his wife from the spirit world? Or was the séance a hoax? If Arthur Ford was a fake, how did he know Houdini's message?

The words in the message were a special code for letters of the alphabet. Each word stood for a different letter in the alphabet. In their secret code the letters spelled the word, "BELIEVE."

In 1929, newspapers printed many articles about the séance. Even though Houdini's message said to "BELIEVE," many people did not believe it was real.

One newspaper article said Bess Houdini and Arthur Ford planned the séance as a show to make money. Some believed that Ford and Bess Houdini made a deal. If she told him Harry Houdini's secret message, he would share some of his riches with her. In fact, Ford became quite famous after the séance.

Other people believed, and still believe, that Harry's spirit really did speak to Bess. Even today, people hold séances on Halloween night every year. They try to talk to Houdini.

They want Houdini's spirit to reveal how he did such an amazing trick. They believe that if anyone could have escaped death, it would be Harry Houdini, the greatest escape artist of all time.

Discover the secret of a mysterious young boy in the next story, "Ghost Cave."