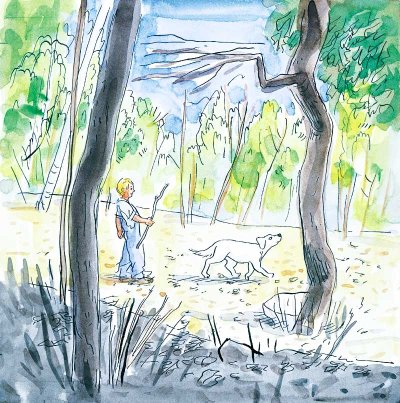 Joey and his dog Ghost would walk through the countryside together.

Once there was a boy who had a friendly white dog named Ghost. Joey and Ghost were best friends. They loved to roam the countryside looking for adventure. They climbed rocks and waded through cool streams.

Joey's neighbors all liked Ghost, too. One day, Farmer Green saw the two friends walk by his farm. "There goes that boy and his white dog again," he said. "They're lucky to have each other."

That day, Joey and Ghost were hunting squirrels. They never caught any. But the chase was the fun part. Ghost would sniff them out. Then the two friends would run after the squirrel until it hid in a tree.

Suddenly, Ghost spotted a squirrel. Then Joey saw the squirrel. Ghost ran around a rock. When Joey got to the other side of the rock, he stopped. Ghost barked at Joey. "What's wrong, boy?" he asked.

Ghost kept barking until Joey backed up behind the rock. Then Ghost moved. Now Joey could see why his friend was barking. A large black snake was coiled up next to the rock! Ghost had protected Joey.

That night, Joey said good night to Ghost. Then he left a treat for him on the doorstep. "See you in the morning," he said.

The next morning, Joey jumped out of bed and ran downstairs. Outside, he whistled for Ghost. "Gho-o-o-st! Come here, boy," he called. But Ghost did not come. Joey wondered where his best friend could be. He ran to the barn to find his father.

"Have you seen Ghost?" he asked. Joey's dad climbed down from the tractor.

"Son, I found Ghost this morning," his father started. "He wasn't moving, so I took him to Dr. Parker's house. I'm afraid there was nothing he could do. Ghost was very old."

Joey was heartbroken. He would miss his friend so much. He wondered who would explore the woods with him.

After Ghost was gone, Joey spent most of his time alone in the woods. He walked along the creeks where he had once played with Ghost.

One day, Joey ventured farther than he had ever gone before. He was walking along the edge of a ravine. Suddenly, he lost his footing. The rock gave way and Joey landed on a ledge below. Joey's leg was twisted and scraped. He could not climb out of the ravine.

Joey yelled for help. But no one was close enough to hear him.

A few miles down the road, Farmer Green was working in his field. It was a very hot day. He wiped the sweat from his brow. Just then, he noticed a white dog running towards him. It looked like Joey's dog.

The dog barked and barked at Farmer Green. "Hey Ghost, how're you doing?" he said. "Haven't seen you in a while."

The dog continued to bark at him. Farmer Green tried to drive his tractor through the rows of beans. But the dog ran right in front of the tractor's wheels.

Farmer Green blew the tractor's horn. But the dog would not budge. Finally, Farmer Green turned off the engine and climbed down from his tractor.

The dog was very persistent. He continued to bark at Farmer Green. Then he ran up to Farmer Green. He grabbed the man's trousers in his mouth and tried to pull him along.

Farmer Green followed the dog through the woods. They wandered for miles through thick brush and tall trees. Every few feet the dog would look back at Farmer Green. He wanted to be sure the man was following him.

The dog leads Farmer Green to the ravine.

They came closer to the ravine. The dog disappeared in the brush.

"Now where did you go?" called the farmer. Then he heard the boy's cries.

Joey was trying to yell for help. He had almost given up. Then he heard a man yelling back to him.

Joey looked up from the ledge. He could see Farmer Green standing at the edge of the ravine. The man was peering down at Joey. He could barely see the boy through the trees.

Farmer Green found a strong vine. He held one end of the vine. Then he threw the other end to Joey.

"Use this to pull yourself up," he said.

Joey grabbed onto the vine. It was strong and thick like a rope. Using his good leg, Joey pulled himself up the side of the ravine. Near the top, Farmer Green reached over and pulled Joey onto the rocks.

"Thank you," said Joey. He tried to catch his breath.

Farmer Green helped Joey sit up on the rocks. "Let's have a look at that leg," he said. Joey's leg was still bleeding.

"Let's find a branch you can use as a crutch," Farmer Green said.

Farmer Green pulled the bark off one end of the branch. Then he helped Joey to his feet.

Joey stood up shakily. "Thank you, Farmer Green," he said.

Joey steadied himself with the crutch. Farmer Green held onto his other arm. Then they hiked through the brush.

Joey and Farmer Green walk back through the forest.

When they came to a clearing, Farmer Green spoke. "That's some dog you got there!" he said.

"What do you mean?" asked Joey.

"I mean, you'd still be sitting in that ravine if that white dog didn't show me where you were," said Farmer Green. "He came to my field and barked and barked. Then he led me out into the woods to find you."

Joey could not believe what Farmer Green was saying. "That couldn't have been my dog, sir," whispered the boy. "My dog died almost a month ago."

Read about two women who accidentally visit eighteenth-century France in the next story, "A Day at Versailles."