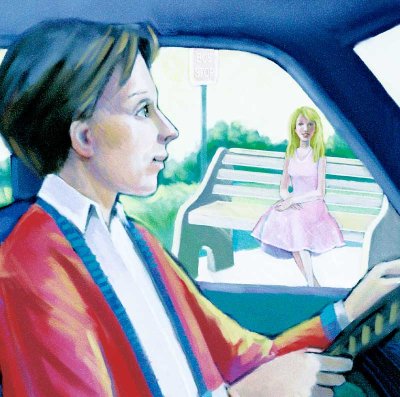 Homesville was a nice place -- at least that is what the people who lived there said. The people who grew up there liked it so much, they nearly always chose to stay there to raise their own children.

Homesville had all the comforts of a big city, but people always knew their neighbors. When you walked down the street, someone would always smile and ask how you were doing.

Jack was one of Homesville's citizens. Everyone in Homesville knew him and everyone liked him.

Jack had a lot of friends. Jack would spend most of his time playing football, basketball, or baseball with his friends. But he did not have a friend that he could just talk to.

That's when he met Mary.

It happened quite by accident. Jack was sitting in his car in front of the library, daydreaming as usual. He spotted a girl sitting on the bench by the bus stop across the street. She was wearing a party dress and looked like she had been waiting there for quite a long time.

"That's the prettiest girl I've ever seen," Jack said. Jack wanted to introduce himself, but girls always made him nervous. He never seemed to say any of the right things. Finally, he gathered his courage.

Jack reached the bench and sat down. The girl kept staring straight ahead. Jack could feel his heart thumping in his chest.

The girl did not answer.

"My name is Jack," he continued.

Then Jack lightly brushed the girl's shoulder. Suddenly, she came to life. She turned to look at Jack. He could see a touch of fear in her eyes.

Jack saw that Mary was shivering in the cool autumn air, so he gave her his letter jacket. They sat on the bench for a long time. Jack did all of the talking. Mary just smiled and offered a few kind words.

The hour grew very late. Jack drove Mary home. When Jack stopped in front of her house, Mary leaned over and gave him a quick peck on the cheek. Jack watched Mary walk to the front door. Before Mary went into the house, she turned, looked at Jack, and smiled. It was the sweetest smile Jack had ever seen.

The next morning, Jack picked a small bouquet of flowers and went to Mary's house. A small old woman answered his knock. When Jack asked if he could see Mary, the old woman looked startled.

The old woman looked at Jack carefully. Finally, she said, "Please come in."

The old woman pointed to a picture on the mantle.

"Is this the girl you spoke with last night?" she asked.

Jack did not believe what he was hearing.

"Everybody liked Mary," said Mrs. Sweet. "She'd meet someone for the first time and talk to them like she'd known them forever. This house was always full of her friends, laughing 'til all hours," Mrs. Sweet paused. "You're not the first person to tell me that you've seen her. I like to think that she's close."

"It's true, Jack," said Mrs. Sweet. She paused and wiped away a tear. "Mary is buried in the Homesville Cemetery."

Jack left Mary's house and ran until he reached the cemetery. When he saw the letter jacket that he had given Mary hanging on a tombstone, he stopped short. Then he saw what was written on the tombstone:

Jack placed the flowers on Mary's grave. He did not know that Mary's ghost was perched on top of the tombstone, watching him closely.

"I couldn't have imagined you," Jack said. "My jacket is right here!"

Jack reached for his jacket and held it close to him. He noticed that it smelled faintly of perfume.

"You did wear this!" he exclaimed. "You were at the bus stop!"

Jack began to pace. He was trying so hard to put this puzzle together.

"There were so many things I wanted to talk to you about," Jack said.

Then Mary walked over to Jack and said, "Don't be sad. I'm right here."

Jack could not hear her, but goose bumps rose on his arms at the moment she whispered in his ear.

He did not know that Mary, the sweetest girl he had ever met, had come to say good-bye.

Ever heard of the Cardiff Giant? Find out more in the next story, an adaptation of Mark Twain's classic "A Ghost Story."