The Inn at the End of the Lane 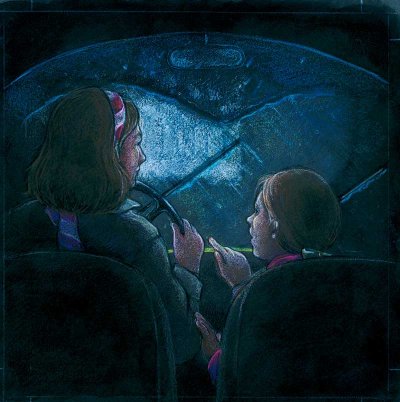 It was raining so hard that Erica's mother could barely drive.

Erica folded her purple pajamas and put them in her suitcase. "There," she said. "I'm ready to go, Mom."

The sky was a bit overcast as Erica and her mother turned onto the interstate. It was already late in the afternoon. Erica gazed out the window. The skyscrapers of the city soon gave way to trees and fields.

As they headed north, it started to rain. At first, big, fat droplets splashed slowly against the windshield.

Then, all of a sudden, the raindrops pounded fast and furiously. Mom turned the windshield wipers on as fast as they would go.

Just then, there was a loud crack of thunder. A bolt of lightning lit up the sky, which had grown quite dark.

"It's raining buckets," Mom declared. "I can hardly see to drive."

"Maybe we should pull over," Erica said.

Erica was scared. They were still several hours from Aunt Jill's house. Worse, they seemed to be stuck in the middle of nowhere.

"Look," Mom said, leaning forward and squinting. "There's an inn up ahead. Perhaps we could stay there tonight."

Erica felt relieved as they pulled up to a quaint farmhouse. It was white with green shutters. The house looked very inviting.

Erica and her mother grabbed their suitcases and rushed to the front porch. Thankfully, the porch was covered, providing shelter from the rain. Mom rang the doorbell. Before long, they heard footsteps in the hall.

"Welcome," said the innkeeper, as she opened the door. "Please come in and make yourselves at home."

"We'd like to rent a room for the evening," said Erica's mother. "I hope you still have one available."

"Certainly, dear," the lady said. "It is quite a storm we're having."

The innkeeper showed Erica and her mother to their room.

The lady led the travelers to a cozy upstairs bedroom. Erica was pleased to see a giant bed with a fluffy comforter. As thunder boomed outside, she could hardly wait to snuggle under the warm, dry covers.

The next morning, Erica awoke to the sound of birds chirping. The terrible storm was over.

Erica and her mother walked downstairs. The parlor looked even lovelier in the bright light of morning.

Erica and her mother could not find the innkeeper.

Erica's mother shrugged her shoulders. "Maybe she went out for groceries," she said. "We can just leave a note."

Erica's mother rummaged through her purse for some paper. She neatly wrapped a note around some money and placed them on the table in the hall.

After driving a few miles, they stopped to get gas.

"Can I help you?" the boy at the gas station asked pleasantly.

"Sure thing," the boy said. He placed the nozzle into the gas tank.

"You didn't happen to drive through that terrible storm last night, did you?" the boy continued.

"As a matter of fact, we did," Erica's mom said. "Fortunately, we were able to spend the night at that charming inn a few miles back."

The boy turned and looked at them. "You don't mean the white farmhouse with the green shutters?" he asked, looking puzzled.

"Why, yes!" Erica's mother replied. "The hostess was so kind."

"Burned down?" Erica repeated in surprise.

Erica's mother figured the boy was joking. She waited for him to laugh. But he seemed very serious. Erica had a creepy feeling.

"Let's drive back, Mom," she suggested. "It will only take a few minutes."

When they returned, they saw that the inn was in ruins.

Erica held her breath as they approached the inn. When they pulled into the drive, she could hardly believe their eyes! Sure enough, the old house was burned, just like the boy had said.

"How can that be?" Erica stammered in disbelief. "We were just here!"

The porch that had protected them from the rain was now sagging and burned. The windows were all broken.

Carefully, Erica made her way to the opening where the front door used to be. Then she gasped. There before her was the hall table. And on it was their neatly folded note.

Like mysteries? Our next read-aloud story is about an old family mystery in "The Little Room."