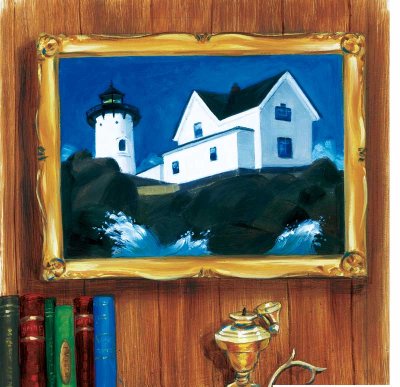 Jack's favorite painting reminded him of the lighthouse in town.

Jack was a writer who moved to a seaside town. He traveled around the coast to write stories about the people who lived there. He did not know that he would soon have his own story to tell.

After settling into his new home by the sea, Jack decided that he needed some artwork. He had heard about an old man who ran a gallery in town. Jack woke up early one morning and walked to the gallery.

"Good morning," Jack said, as he opened the gallery door. He shook the old man's hand. Jack introduced himself, then began looking at the paintings.

The old man had an assortment of paintings. There were scenes of flowery meadows, city skylines, and desert landscapes. But Jack kept coming back to a painting of a lighthouse. It reminded him of the lighthouse at the edge of town.

"What a perfect picture for my wall," he said. "I'll take this one."

"I hope you have the perfect place for this painting," the old man said. He wrapped the painting in brown paper.

Jack paid the old man and walked home with the painting under his arm. He could not wait to find the perfect place to hang it.

That afternoon, Jack found a place above his mantel. He hammered a nail into the wall and hung the picture. Jack sat back to see if it was straight.

"This is perfect," thought Jack. "I can look out my window and see the sea. And I can look above the mantel and see the lighthouse. What inspiration!"

That evening, Jack sat down to read over some notes from the day before. He had been interviewing a young woman. Her grandfather had run the lighthouse years earlier. The young woman told many stories about her grandfather. He had loved the sea so much that he wanted to be buried there.

Jack suddenly looked up from his notes. He thought he saw shadows moving across the dark room. Jack got up and walked down the hall. He saw the shadow again! This time he caught a glimpse of a ghostly old man.

Jack could see a shadow moving across the painting.

Jack shivered in the darkness. He rubbed his eyes.

"Perhaps I'm just tired," he thought. "My eyes must be playing tricks on me." Jack turned out the light and went to bed.

That night, he dreamed about the lighthouse in his new painting. Jack was standing on its platform and looking out to sea. He saw an old man sitting alone inside the lighthouse. The man seemed very sad. Jack tried to speak to him. Then Jack woke up.

The next morning, Jack felt like he had to move the painting. He did not know why he felt that way. He just did.

He looked around his house for the perfect place. He decided the best place for the painting was right above his desk in the den. "This will inspire me to write my newest story," thought Jack.

That evening, after a quiet dinner, Jack sat down at his desk to work. He was reading a book about lighthouses when a strange feeling came over him. He felt very cold. Jack shivered as he turned the pages.

Then in the corner, Jack saw the shadow again. This time, Jack was sure it was an old man. The shadow paced back and forth in the room. Jack could tell the man was sad and restless.

Jack was very puzzled. He began thinking about the painting. "Could that be why the shadow is here?" he wondered. "Perhaps I have not found the perfect place for it."

Jack went to bed that night thinking about the painting and the ghostly shadows. He tossed and turned throughout the night.

In the early morning, Jack finally fell asleep. He had a dream about the old lighthouse again.

This time, the old man was looking out the window of the lighthouse. He was staring at the sea and watching the gulls dip and dive. The old man looked so happy!

Jack awoke with a start. He knew exactly what he must do.

Jack jumped out of bed and quickly got dressed. He took the painting down and carried it into his living room.

Then he found the perfect place for the painting. It was directly across from his biggest window. Jack loved sitting in front of this window himself. He would watch the waves breaking on the rocks as the sun rose each morning.

Jack moved the painting so that it faced the sea.

Jack hammered a nail into the wall. Then he carefully hung the painting. He stepped back to see if it was straight. Then he turned around to look at the sea. "Yes!" he exclaimed. "This is definitely the perfect place."

That night, as Jack worked, he waited for the ghostly shadow to appear. But it never did. The shadow did not appear the next night or the night after that.

Jack noticed that a certain sense of peace and calm had come over his house. He stopped dreaming about the old man and the lighthouse, too.

Soon after the strange shadow had disappeared, Jack started working on a new project. He was writing a story about the painting and the ghostly shadow.

Jack decided to start at the beginning. He described how he had found the little house by the sea. He wrote about meeting the old man at the gallery and how he chose the painting of the lighthouse. Then he came to the part about the warning from the owner of the gallery. "I hope you have the perfect place for this painting," he had said.

Jack decided to take a break from his writing. He got up from his desk and walked over to the painting.

Jack grabbed a cloth and dusted the wooden frame. Then he stopped to look at the picture.

Jack noticed something he had never seen before. A man was standing on the platform of the lighthouse. He was looking out to sea.

"This man looks almost like the shadow," Jack thought.

Then he realized something else. It was the same man from his dreams!

Learn how the great magician, Harry Houdini, delivers a final message in the next story, "Houdini's Great Escape."