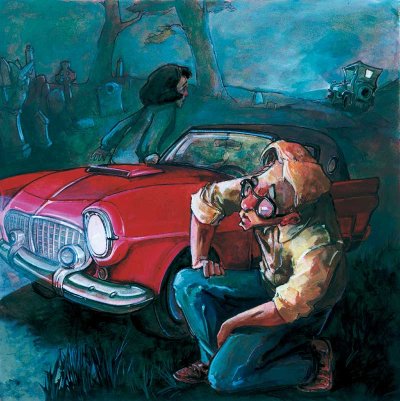 The couple couldn't find a single scratch on their car.

Ghosts and spirits have been seen in many places. But a cemetery is one of the most common places to see a ghost.

Bachelor's Grove Cemetery is near Chicago. It is called the "most haunted place" in Illinois.

Over the years, a lot of strange things have happened at Bachelor's Grove Cemetery. Many people have seen the white misty shape of a woman holding a baby. Others have even seen a disappearing house at the cemetery. An eerie light comes from one of the windows, then the whole house disappears.

But the strangest report was about a ghost car. A couple was driving through the cemetery. Suddenly, they saw an old car coming right towards them!

The couple knew they could not swerve out of the way in time. So the man and woman closed their eyes. They expected to crash into the other car. They heard screeching brakes, a loud crash, and broken glass.

But when they opened their eyes, they realized they were not hurt. They looked around. The old car was nowhere to be found. They got out to inspect their own car. It did not have a scratch on it.

Another cemetery where there are almost just as many ghosts as graves is Woodland Cemetery in Dayton, Ohio. One dark night, two college boys were walking home. It was late, so they decided to take a shortcut. They climbed the tall gate to cut through the cemetery. The boys saw a woman crying on the steps in front of a stone tomb.

"Do you need help?" asked one boy.

As they got closer, the boys noticed they could see right through the weeping woman.

"Are you okay?" asked the other boy.

The ghostly shape looked up at the boys. She had very sad eyes. She stood up quickly and started to float backwards.

She drifted up the steps, passed through the tomb's heavy stone doors, and disappeared. The boys looked at each other.

"Let's get out of here!" they shouted, as they ran away.

When the two students told the cemetery's groundskeeper what they had seen, he nodded. He had heard the story many times before.

"Well," the groundskeeper said, "you're not the first people to meet the Weeping Woman of Woodland."

The two friends meet the Weeping Woman of Woodland.

Ghost sightings at cemeteries usually happen at night. Many ghost experts believe this is when ghosts roam. They say that many spirits cannot find rest in the afterlife. They are cursed to wander all day and night. For this reason, ghosts are sure to be awake when everyone else is asleep.

One famous ghost in Columbus, Ohio, wanders at night. She makes so much noise, she wakes up the neighbors! People who live near Camp Chase Cemetery wake up to hear loud cries in the middle of the night.

The sad ghost is known as the Lady in Gray. Neighbors who have seen her say she is dressed in a gray suit from the 1860's. They say the Lady in Gray is full of sorrow because her husband died in the Civil War. Some believe she is the wife of Benjamin Allen, a soldier who died at Camp Chase during the Civil War. His tombstone is still there today.

Many people have seen the Lady in Gray. One neighbor heard her cry out, "I miss you! Benjamin! Oh, no."

The neighbor finds two red roses in the cemetery.

The neighbor thought the cries were a loud prank. He went to the cemetery to investigate. But he did not see the Lady in Gray or anyone else for that matter. But there were footprints in the snow. Then he found two red roses left in front of Benjamin Allen's tombstone.

There's nothing more peaceful than a beautiful house in the country and a talkative little girl. Or is there? Learn about Vera in the next story, "The Open Window."