A Day at Versailles 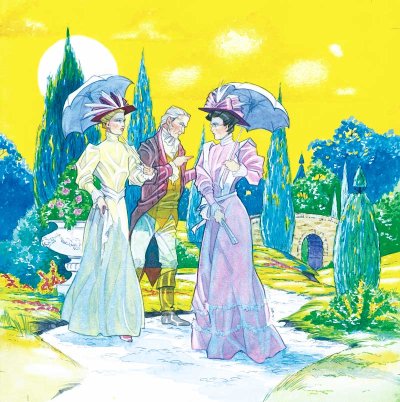 The man with the scarred face shows the two friends which path to take.

One day in 1901, two women named Anne and Eleanor traveled to France. They wanted to see the palace at Versailles. This palace was Queen Marie Antoinette's home in the late 1700's.

Anne and Eleanor toured the palace. Then they went outside to the gardens. They wanted to find Marie Antoinette's smaller home, a villa.

The women searched for the little villa. Along the way, they saw a deserted farmhouse. They noticed an old plow on the side of the road.

A deep sense of sadness and gloom instantly fell over both women. They felt as if something terrible was about to happen.

Soon the two women discovered they were lost. They did not know where to go until they met two men.

The men were dressed in long green coats. They wore three-cornered hats. The women realized that the men's clothes and hats were odd, too. They were the kinds of clothes soldiers wore during the French Revolution.

"Which way to the villa?" Anne asked the men.

The men pointed down a path. "Follow that path," they said.

It was not long before they found a beautiful gazebo. On a normal day, the gazebo would have been lovely. Yet this did not seem like a normal day. The countryside looked eerie. Anne and Eleanor felt even sadder than before. The trees were still. The birds were silent.

Now the women had stronger feelings of gloom. Something terrible would surely happen soon. But what?

Anne and Eleanor decided to keep going. If they could find the villa, maybe they would feel better.

Suddenly, a man rushed up from behind them. He had a peculiar smile. His face was scarred.

The man stared at Anne and Eleanor. Finally, he said, "You are going the wrong way."

The man pointed to a small bridge. He told the women to go across it. Anne and Eleanor turned and started across the bridge. When they looked back, the strange man was gone.

Anne and Eleanor got to the other side of the bridge. Soon they came to an area they felt must be the villa. Everything was still strangely flat. The countryside looked like something in a bad dream.

Anne noticed a beautiful lady. The lady was sketching the countryside. She wore an old-fashioned dress and a pale yellow scarf around her neck. She looked very sad.

Anne shivered as she looked at this beautiful lady. There was something familiar about her. But who could she be?

Both Anne's and Eleanor's feelings of sadness and gloom grew stronger and stronger. But they could not explain what made them feel so sad.

Anne and Eleanor turned to see a man rush out of a nearby building. He slammed the door. Then he glanced at Anne and Eleanor. "The entrance to the villa is on the other side of the building," he said.

Anne and Eleanor walked around to the other side of the villa. When they got there, they found a small wedding party waiting to tour all the rooms of the villa.

Anne and Eleanor see a beautiful, mysterious lady in the road.

Anne and Eleanor's gloomy mood magically lifted. A soft breeze blew the leaves of the trees.

Anne and Eleanor continued their tour of the villa. Everything seemed normal again. Nothing else unusual happened that day. But the two women did not understand the strange sights they had seen.

The next year, Anne returned to the French palace. She searched for the villa again. But everything looked different.

Anne told a gardener about the men in green coats and the man with the scarred face. Then she described the lady sketching and the man who had rushed out of the villa.

Anne tells the gardener that the grounds had looked different last year.

The gardener turned to the door that Anne had seen a man rush out of last year. The door was bolted shut.

"It's been bolted shut for many years," said the gardener.

"I know who the lady was," said Anne. "She was Marie Antoinette."

Anne knew she had stumbled into Marie Antoinette's own sad memory. It was her memory of a day in 1789. She had just learned that an angry mob from Paris was marching towards the palace gates to get her.

Read about a boy who meets a mysterious young woman in the next story, "Sweet Mary."