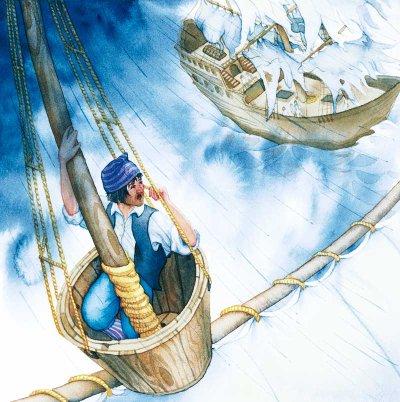 Reid could see the other ship from the crow's nest.

Reid Brenner was the youngest and smallest sailor on the ship. It was his first voyage out to sea. The smallest sailor always had the job of night watch. Reid climbed up the ship's tallest mast.

Reid stared into the dark waves. He saw a fuzzy red flash of light. The light moved closer. Suddenly the ship rocked. A rough wave crashed against the boat. A fierce storm fell upon the ship.

Reid looked down at the sea. There, beside his ship, another ship bobbed on the waves. The ship was old. Its sails were tattered.

The crew of the strange ship looked up at him. Their eyes were gloomy. All their clothes were soaked and torn. Their faces were pale.

Lightning flashed again. Suddenly, the storm ended. The ghostly ship was gone. Reid looked for the ship. He could not see it.

The next morning, some of Reid's mates asked about the sudden storm. Reid told no one what he saw.

Later that day, Reid Brenner was struck with a terrible fever. His ship was miles from shore. There was no doctor on the ship. He could not be saved.

Sailors tell many stories of the sea. Some are true, and some are legends. One story has been told for hundreds of years. The Flying Dutchman was a ship that sailed the seas long ago. In 1641, this ship sailed into a terrible storm.

The captain, a proud man named Hendrick Vanderdecken, would not stop or turn his doomed ship around. The captain ordered his crew to push through the dangerous storm.

Captain Vanderdecken sailed the ship through the storm.

The captain and crew of the Flying Dutchman never reached land.

Some sailors say the Flying Dutchman still sails the seas today. It is said that the ship must sail through stormy waters forever.

For almost four hundred years, sailors have reported seeing the phantom ship. Often it appears from nowhere and disappears as quickly. Usually it is seen at night or during a storm.

The ship's ghostly crew may be seen working on the deck. Some sailors have claimed to see the Flying Dutchman's captain. They say he sadly warns them to stay away.

Any ship that crosses the Flying Dutchman's path is said to be doomed, too. After seeing the phantom ship, other ships have had accidents. Many sailors have gotten sick. Some have died not long after reporting a sighting.

The sea is a dangerous place. Sailors throughout history have faced storms, pirates, and diseases.

On long voyages, they tell many stories to each other. Legends of haunted ships have been told for centuries. The story of the Flying Dutchman has been told again and again.

It is not just an old tale of the sea. Sightings have been reported in modern times. Many people claim they have seen it.

The story of Hendrick Vanderdecken's ship is true. His ship and his crew were caught in a storm. They never made it to shore.

The reports of strange sightings are hard to ignore. The terrible tragedies that happened after sightings are also very real. But are they all related to seeing the phantom ship?

Many ships have been lost at sea. There is no way to know what happened. Lost ships leave no explanations. Their crews are never heard from again. They may have been sunk by storms. They may have crashed into rocks. Some may have crossed the path of a phantom ship.

Were the last faces those doomed sailors saw the ghostly faces of the crew and captain of the Flying Dutchman?

Experience a post-Civil War adventure in New York City with the next story, "How He Left the Hotel."