How He Left the Hotel 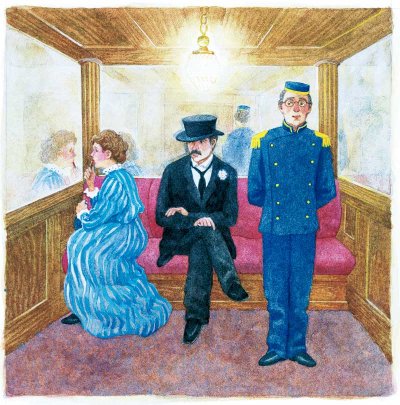 The Empire Hotel had luxurious elevators.

After the Civil War ended, I headed to New York City. My captain was from New York. He had told me all about the city.

"Stop by the Empire Hotel, Mole," he told me when I was discharged. "I know some people there. Perhaps I can get you a job."

New York was exciting. I decided to take my captain's advice and stopped by the Empire Hotel. It was an elegant red brick building with a fancy lobby.

"Welcome," said the friendly doorman. He was dressed in a uniform with polished brass buttons and a stylish cap.

"My name's Joe," he said with a grin. I shook his hand and then introduced myself. Joe introduced me to the hotel manager.

"I spoke with your captain," the manager said. "I'd like to offer you a job. We need someone to operate the hotel elevator from two o'clock in the afternoon until twelve midnight. We'll provide wages and a room."

Like everything at the Empire Hotel, the elevator was modern and fancy. It had a decorative light inside and mirrors on the walls. It even had velvet cushions where visitors could rest during their ride.

One November, a new tenant arrived at the Empire Hotel. His name was Colonel Saxby. Colonel Saxby was also a Civil War veteran. I knew right away because he often wore his military cloak.

Colonel Saxby was a kindly gentleman who kept to himself. I figured he was in his fifties. He was tall and thin, with a gray mustache and a pointy nose. His skin was pale. He had a reddish scar on one cheek. He also walked with a very slight limp.

"I took a bullet in the knee," he explained to me one day.

Sometimes, in the elevator, the colonel and I would talk a bit about the war. Even though he would talk to me, I wouldn't say he was overly friendly. That did not bother me, though.

Since I worked the elevator, I came to know everyone's routine. Colonel Saxby was especially predictable. He rode the elevator up to the fourth floor at the same time each day. He never rode it down, though. I figured he must have used the stairs.

I was proud to tell people I worked at the Empire Hotel. It was one of New York's finest.

Sometimes operating the elevator grew dull, but I really enjoyed all the people.

I became good friends with a few of the other workers. Joe, the doorman, worked the same shift as I did. When it was slow in the evening, we would often talk. He told me all about his brothers in Boston. I told him about my sister in Connecticut. A lot of times we talked about the war.

Every night at midnight, I always locked the elevator. Joe generally tidied up the lobby a bit. Then, on Wednesdays, we headed to the community room for a game of cards. Helen, one of the hotel housekeepers, often joined us.

Helen was cheerful and talkative. She always kept things lively. Best of all, she generally brought us something good to eat. Her homemade soup and meat loaf sandwiches were mighty welcome after a long day.

"This is delicious," I told Helen one cold February night. She had baked an apple pie. I dare say it was the best I ever tasted.

Joe pushed his empty plate aside and thanked Helen for the meal. Then, as usual, he began shuffling his well-worn deck of cards. The three of us played until the wee hours of the morning.

The next day, I found myself watching the front door, waiting for Colonel Saxby to arrive. The colonel always rode the elevator up at three o'clock each day. In fact, I could not recall a single day when he had not been on time.

I guess there is a first time for everything, though. Colonel Saxby never did show up that day. He did not show up the next day either.

"Have you seen Colonel Saxby lately?" I finally asked Joe.

At the end of my shift that night, I had just started to lock up the elevator when the call bell rang on the fourth floor. I figured it must be a visitor who did not realize the elevator stopped running at midnight.

The colonel looked even paler than usual.

As the clock struck twelve, I rode to the fourth floor. When I opened the elevator door, I was very surprised to see Colonel Saxby. His military cape was draped over his shoulders. I noticed his skin was even paler than usual. The man looked ill. I was really concerned about him. I wondered why he was venturing out so late at night.

"I'm glad to see you're better, sir," I said. But Colonel Saxby just looked at me with a hollow stare. Then he boarded the elevator. It was the first time I had ever given him a ride down.

When the elevator stopped in the lobby, I opened the door. Colonel Saxby, who had stood perfectly still during the ride, departed without a word.

Joe opened the door. Then Colonel Saxby walked out into the snow.

Just then, the doorbell rang. Joe opened the door. A gentleman with a black bag entered. I could tell at once he was a doctor.

"I'm sorry, but the elevator stops running at midnight," I explained.

"This is a matter of life and death," said the doctor.

I did as he requested. The doctor rushed straight to room 210.

The doctor covered Colonel Saxby's face with his sheet.

Colonel Saxby had just passed away.

"That can't be," I said. "I took the colonel down in the elevator just a few minutes ago. Joe saw him, too. Colonel Saxby just left the hotel."

"It must have been someone else," the doctor said.

The manager asked me to take Colonel Saxby's body down in the elevator.

I knew I couldn't stay at the Empire Hotel any longer -- not after what I'd seen. I turned in my keys and left that night. Joe, the doorman, left with me.

Read about a dream come to life in the next story, "The Lighthouse."