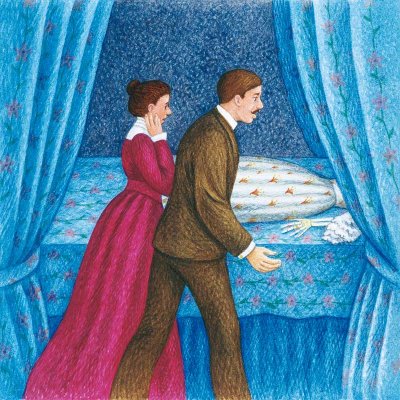 The young woman was still wearing the clothes that she had died in over two hundred years ago.

Chambercombe Manor was a very large house on the rocky coastline of Devonshire in England. For three hundred years it was haunted by the ghost of a young woman.

One owner after another reported seeing the young woman. No one ever reported being afraid of the ghost. But no one ever knew who she was -- not for three hundred long years.

Then about one hundred years ago, the owner of the house discovered a tiny room. It had been hidden away behind plastered walls for years. Inside the little room was the skeleton of a young woman. She was lying on a beautiful bed. She was still dressed in the clothes she had worn more than two hundred years before.

The clothes had been soft and beautiful, but they were now dusty and fragile. The skeleton wore beautiful rings and necklaces, now dark with age.

But still, no one knew the woman's name. No one knew why she had been hidden away in the tiny room for so many years. The skeleton was soon buried in a small cemetery in the village. But the sad ghost continued to walk up and down the halls of the old house. Why was she there?

In the 1600's, Chambercombe Manor was owned by Thomas and Mary Oatway. The Oatways owned a little shop. But no one knew that the Oatways were wreckers.

During stormy weather, when the Oatways knew that a ship was sailing by the coastline, they would build a fire on the shore. The captain of the ship would think the fire was a light to guide him to safety. He would sail his ship into the big rocks on the coast.

The ship would crash into pieces. The cargo would wash up on the shore. The Oatways would gather all the valuable goods and store them in a cave. The cave led to a secret tunnel that went right into their house. No passengers or crew ever lived to tell the story.

The Oatways lured ships onto the rocks by lighting a fire.

One night long ago, the sky was black except for some streaks of lightning. Thomas searched the sea each time the lightning flashed.

"Aye, she's still there," he shouted. "Maybe she has seen our fire."

"Pile on more wood. We must make a large light for the ship to see," Mary said. "We need more goods for our store." Mary and Thomas piled more wood on the blazing fire so the heavy rain would not put it out.

"She's seen our fire," Thomas said. "She thinks it's the safe channel."

Mary and Thomas stood in the rain and wind. They watched the ship roll and toss on the waves. They heard the crunch of wood as the bow of the ship struck the rocks.

Mary thought she heard cries for help above the roar of the waves. She closed her eyes and put her hands over her ears.

They began to search for the boxes and crates. Thomas set his lantern by his side to pick up the boxes. The yellow rays from the lantern fell on a still body lying face down in a shallow pool of water.

"There's a woman here," Thomas called. "I think she is alive."

Only one person had survived the shipwreck.

They pulled the woman from the water. Thomas leaned down and put his ear to her heart.

Mary saw that the woman's face was badly cut from the jagged rocks. Her heart sank. She wanted to help this young woman. "We can't leave her here," she said to Thomas.

"All right, Mary, we'll take the lady with us," Thomas said. He picked up the woman and carried her safely into the cave.

They put the woman in Elizabeth's bedroom. Elizabeth was their daughter. Thirteen years ago, the young girl had run away. Life in the tiny village and work in the store was not very exciting for her. She had not known about the fires, the shipwrecks, or the secret tunnel.

They had never received a letter from Elizabeth since then. Mary had cried for years before packing Elizabeth's clothes away. This woman and Elizabeth were about the same age.

Mary sat by the woman lying still on the bed. She had cleaned her face and wrapped bandages around it. But there was nothing else Mary could do. The lady was dying.

"What can we do with her body?" Mary asked.

"If we report her death, people will know we are wreckers," Thomas said.

They sat next to the young woman until she stopped breathing. The sun was shining brightly through the windows.

"We could bury her in our secret room," Mary said.

Thomas thought for a while. "You're right, Mary. We can plaster over the doorway and nobody will ever know that she is there. We'll be safe," he said.

He lifted the woman's body and carried her to the secret room.

The man told the Oatways what had happened in the shipwreck.

Three days passed. Mary was pouring the tea when she heard a knock at the front door.

Mary crossed through the hall and swung open the heavy door. Before her stood a tall, well-dressed man. His head was bandaged. His arm was in a sling.

"I am afraid I have very bad news for you," the stranger said. "May I please come in?"

Mary invited the stranger inside. They sat quietly and drank tea until the man broke the silence.

"Four days ago, I was on a ship from Ireland. But it sunk off your coast. I am the only survivor," he said.

Mary's face turned pale. Thomas gripped the arms of his chair. Did the man know that they had built the fire that caused the ship to wreck?

"I'm afraid I have some very bad news for you," he repeated. "Your daughter, Elizabeth, ran away to Ireland thirteen years ago. She had married a wealthy Irish gentleman. I met her on the ship that sunk. She missed you terribly and was coming to visit. It was supposed to be a surprise."

In the 1960's, construction workers were tearing down an old house in Ireland. They found a metal box. Inside the metal box was a letter addressed to the owners of Chambercombe Manor, Combe Martin, Devonshire, England. The letter read:

Before I die, I wish to confess my sins. My good wife is now dead. I cannot go unless someone knows what I have done. My wife and I lived for a number of years in Chambercombe Manor.

We were blessed with a beautiful daughter, who ran away when she was still a girl. We caused a ship to wreck and killed our own daughter in the wreck. We placed her body in a secret room. We could no longer live in our house. We thought we saw our daughter's ghost in the house. We moved to Ireland so we could be near our grandchildren.

May God forgive us.

A mother and daughter take refuge in a mysterious house. We'll show you what happens in the next story, "The Inn at the End of the Road."