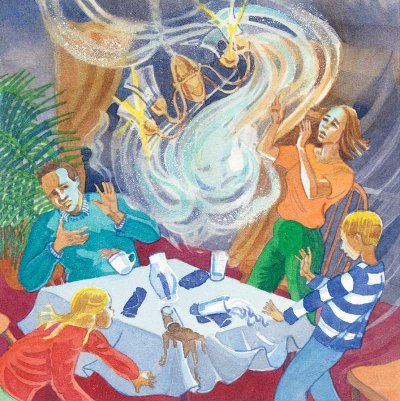 No one could finish a meal at Jim's Village Inn.

It was Friday night. Jim Osborne crossed his fingers. He hoped nothing strange would happen at his restaurant that night. Friday night used to be the busiest night at Jim's Village Inn. But now very few people came to his restaurant. The week before, the cook had quit.

"How can I get the food ready?" the cook had asked. "The flame on the stove keeps blowing out! Food is missing from the cupboard! Every time I turn around, the freezer door opens! I can't stand it!"

Word was spreading around town that Jim's Village Inn was haunted.

Jim watched as a family started to eat their dinner. The table shook and their plates crashed to the floor. Jim went to apologize for the mess. The family was shocked. They wanted an explanation. But Jim did not have one.

Jim picked up the phone. He dialed a number from a newspaper ad.

"This is Jim Osborne," Jim said. "I run Jim's Village Inn. I need your help."

"Close your restaurant early tonight," said the ghost hunter. "I will be there before midnight."

Ghost hunters do their best work at night. They study poltergeists. Poltergeists are ghosts that knock things over. They make a lot of noise.

Ghost hunters do not study every case they hear about. Some events can be easily explained. Sometimes people are just imagining things.

But some cases are truly unusual. These cases demand an expert and that is when the ghost hunter comes to investigate.

Ghost hunters take measurements to detect the presence of spirits.

In their investigations, ghost hunters use the tools of science. A ghost hunter's kit would contain a camera, a sound recorder, and a thermometer.

Harry Price was a famous ghost hunter. He studied hundreds of haunted places. He did not believe a place was haunted until he could find scientific proof.

Price wanted to get evidence that he could record. He studied a haunted place by spending the night in it. Price wanted to record sounds and watch for movement.

He spread flour on the floor to detect footprints. He set up motion-sensitive alarms that would wake him up.

Sometimes tables shook, lamps fell over, or doors locked. There was nobody in the house but Harry Price, and he had not moved. These were places that Harry Price proved were haunted.

Other famous ghost hunters were some of history's most respected scientists. They started out wanting to prove that haunts were just silly stories. But their studies changed their minds.

Sir William Crookes studied haunted houses in England during the 1800's. He attended many séances, when people get together to try to talk to spirits. He saw and heard many things that science could not explain.

Today's ghost hunters have advanced machines. They are used to sense the slightest changes in temperature or movements in the air. Machines can help the ghost hunters see in the dark. They also help to give proof that other people can see and believe.

Ghost hunters do not really "hunt" ghosts. There is nothing they can do to make ghosts go away. They hunt for proof in haunted places. Once they record ghostly activities or find no proof, their job is done.

Their work proves that ghosts are hard to track and impossible to trap. For these real-life ghost busters, the hunt continues.

A ghost hunter proved that Jim's Village Inn was inhabited by mischievous spirits. It is now called Jim's Haunted Inn. Every Friday night, people come from miles around to dine in the presence of a poltergeist.

ABOUT THE AUTHORS AND ILLUSTRATORS:

"The Canterville Ghost" Based on the story by Oscar Wilde, Adapted by Renee Deshommes, Illustrated by Stacy Schuett

"The Legend of Sleepy Hollow" Based on the original story by Washington Irving, Adapted by Rebecca Grazulis, Illustrated by Jeffrey Ebbeler

"A Day at Versailles" Written by Suzanne Lieurance, Illustrated by Jane Chambless Wright

"A Ghost Story" Based on the original story by Mark Twain, Adapted by Lisa Harkrader, Illustrated by Ute Simon

"The Open Window" Based on the original story by Saki, Adapted by Elizabeth Olson, Illustrated by Jenifer Schneider

"How He Left the Hotel" Based on the original story by Louisa Baldwin, Adapted by Lora Kalkman, Illustrated by Ellen Beier

"The Lighthouse" Written by Renee Deshommes, Illustrated by Laurie Harden

"The Inn at the End of the Lane" Written by Lora Kalkman, Illustrated by Teri Weidner