Life After the Presidency 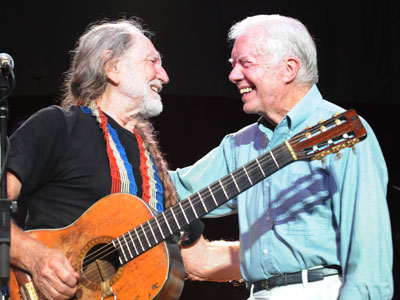 Former President Jimmy Carter on stage with old friend Willie Nelson during a performance in Atlanta in 2008.
Rick Diamond/WireImage/Getty Images

There are three ways a president can leave office mid-term: death, resignation or impeachment. Eight presidents have died in office. Four of these presidents, Abraham Lincoln, James Garfield, William McKinley and John Kennedy, were assassinated (five other sitting presidents have survived assassination attempts). Of all presidents, William Henry Harrison had the shortest administration; he died of pneumonia one month after his inauguration.

Only one president, Richard Nixon, has resigned. Two presidents have been impeached, Andrew Johnson and Bill Clinton. Neither was convicted; Johnson escaped Senate conviction by one vote and Clinton was found not guilty in the Senate by a wider margin.

­Most presidents fulfill one or two terms and are either defeated in re-election or retire. So what's life like for a person who's been the leader of the free world? Generally, it's good. Some presidents retire to a life outside of the public eye. Many have published their memoirs. Others use the prominence afforded by the presidency to continue or even improve their work. Jimmy Carter, after leading an unpopular single-term administration, went on to create what many agree is the most successful post-presidency. The former president established the Carter Center, a human rights organization, and became heavily involved with Habitat for Humanity, which builds homes for the poor.

For most of U.S history, presidents have been given a pat on the back on their way out and that's about it. That changed in 1958, when Congress passed the Former Presidents Act. This law gives a departing president an annual pension of $25,000 a year under the original bill. Since then, the amount has been increased to the same as a Cabinet member, about $161,000 per year. The government also provides a former president funding to support an office and staff for four and a half years.

Not all presidents leave public life after the White House. President William Taft went on to become the Chief Justice of the Supreme Court, appointed by President Warren Harding 12 years after Taft left office. Taft preferred the judicial over the executive branch: "I don't remember that I was ever president," he once said [source: White House]. Other presidents have been appointed or elected to various positions. After being impeached, Andrew Johnson was elected as a senator for Tennessee. John Quincy Adams went on to serve Massachusetts in the House of Representatives, and John Tyler served in the Confederate House of Representatives 16 years after leaving the White House [source: Mental Floss].

"There is nothing more pathetic in life than a former president," President John Quincy Adams once said. That, like all other aspects of the American presidency, has evolved and changed, all due to the decisions made by the people who've held the office.

Read the next page for more information on U.S. presidents and other related topics.