The Constitutional Requirements of the President 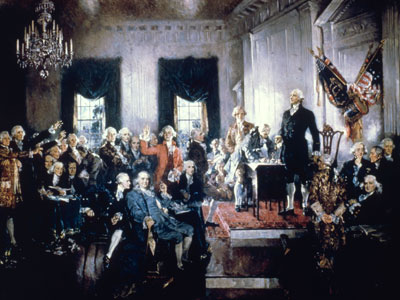 The U.S. Constitution is signed in Philadelphia, Sept. 17, 1787.
MPI/Getty Images

The grueling campaign process is one obstacle that the American political system has created to vet candidates for the presidency. For more than a year, a candidate must compete against other members of his or her party in the primary race, be nominated at the convention and then campaign against nominees from other parties for the general election. Political connectedness and experience is essential, as is winning public opinion.

The Constitution lays out rules and duties for the president.

This is the extent of the president's duties, and later amendments and laws further shaped the presidency. The 22nd Amendment (ratified after Franklin Roosevelt's record three full terms) limited the president to two terms, although these needn't be consecutive: President Grover Cleveland served two terms with a four year hiatus in between. The succession of power in the event of the president's removal or incapacitation was delineated in 1947: Next up is the vice president, the speaker of the House, the Senate president pro tem and then the members of the Cabinet, beginning with the secretary of state and ending with the Secretary of Veteran's Affairs.