The U.S. President as Commander in Chief 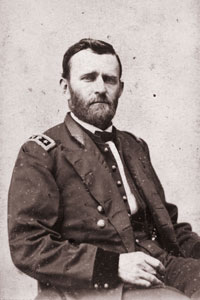 President Ulysses S. Grant had an easy transition to the role of commander in chief; he'd served as the commander of the federal army during the Civil War four years prior to taking office.
Hulton Archive/­Getty Images

Arguably, the most solemn role of the president is to serve as the leader of the U.S military. Under the president's direction, the United States can carry out retaliatory invasions, such as the invasion of Afghanistan in 2001. Wars can be indirectly prompted or unprompted, as with the U.S. invasions of Iraq in 1990 and 2003. U.S. military involvement can be massive, like that in Vietnam and Korea. Or the U.S. military can strike from the air, as occurred against Iraq under President Bill Clinton in 1998 or the Special Forces invasion of Panama in 1989. The United States can commit troops to larger organizations of which it's a member, like NATO and the United Nations. All of these actions share the commonality of being ordered by the president of the United States.

The Constitution gives only Congress the power to declare war; it charges the executive with carrying out the war as commander in chief. But in the history of the United States, Congress has authorized the use of force by the military, but has only formally declared war five times: The War of 1812, the Mexican War, the Spanish-American War and the two World Wars [source: Mitchell]. All other U.S military action undertaken by the United States throughout its history has been under presidential order. Like most other powers, the president's ability to wage and operate war evolved over time.

­Perhaps no other president defined presidential wartime powers like Abraham Lincoln did. In 1861, while Congress was adjourned, he activated the military, sent troops to Southern states, ordered the Navy to blockade the port of New Orleans and appropriated funds from the Treasury. Lincoln was also the first to declare martial law (the temporary removal of power from the courts) and suspend habeas corpus (the right for a prisoner to petition the legality of his or her imprisonment).

Lincoln's actions were vast and unprecedented (and unconstitutional). But as we've learned, in times of crises, the executive branch enjoys the most power. Congress has historically gone along with presidential wartime actions, even if they didn't agree. Tactics in the context of war, like the troop surge in the Iraq War in 2007 or the detention of Japanese-Americans in internment camps during World War II, were congressionally unpopular, but were ultimately approved by the legislative branch.

Presidents following Lincoln's example during the Civil War have learned how to make end runs around Congress to wage wars. Most commonly seen have been executive orders. These are decrees issued by the executive branch (without formal input from Congress) that have the effect of law over federal agencies. They can be used, among other things, to direct the military into action. Executive orders led the United States into war in Korea and Vietnam. Without congressional approval, they technically weren't wars, which is why Vietnam and Korea are referred to as conflicts.

The language found in some treaties, like those with NATO and the United Nations, may also be used by presidents to declare war without congressional approval. President George W. Bush's decision to launch an attack on Afghanistan was supported by the charters of the U.N. and NATO, both of which the United States is formally bound to, which allow for retaliation by a nation that's been attacked.

The military isn't the only tool of the president's war power. Intelligence and covert agencies like the CIA, the National Security Agency (NSA) and the Central Security Service can all provide the president with surreptitious, nonmilitary options in dealing with threats abroad. These agencies can also provide information for decisions concerning strategy in times of war.

Read about the president's domestic responsibilities on the next page.