by Patrick J. Kiger Aug 6, 2019
A podium displaying the presidential seal stands before the start of an event recognizing the Wounded Warrior Project Soldier Ride in the East Room of the White House, April 18, 2019, in Washington, D.C. Drew Angerer/Getty Images

Over the years, you've probably noticed the emblem emblazoned on the side of Air Force One. It also is attached to the podium from which the U.S. president gives speeches and appears on official White House stationery and invitations. A railroad locomotive painted to honor President George H.W. Bush is decorated with it. It's the Seal of the President of the United States of America, the official symbol of the top office in the land.

The presidential seal is one of those familiar symbols you've seen so often that you may never have bothered to scrutinize it closely. But the symbol got a lot of attention recently after President Donald Trump appeared at the conference of a conservative youth organization. As this Washington Post article details, the seal projected on a screen behind Trump as he spoke wasn't the actual presidential seal. Instead, it was a parody — apparently downloaded from the internet by mistake — that poked fun at him by using a double-headed eagle similar to Russia's coat of arms, which clutched a fistful of currency and a set of golf clubs instead of an olive branch and arrows in its claws.

President Trump isn't the only commander-in-chief who's had a presidential seal mishap. His predecessor, Barack Obama, was in the midst of delivering a speech in 2015 when the seal became detached from the podium and crashed to the ground. "Was that my, uh ...," Obama said as he looked down at the fallen seal, feigning concern, to the crowd's laughter. "That's alright," he deadpanned. "All of you know who I am." (Here's an Associated Press video of that moment.)

The History and Elements of the Seal

The presidential seal looks similar — with slight differences — to the Great Seal of the United States, the official symbol that's impressed upon official documents such as treaties and commissions. The precise design of the presidential seal was detailed in Executive Order 9646, issued in October 1945 by President Harry S. Truman. It specified that the seal depict an American eagle that's holding an olive branch in its right talon and a bundle of 13 arrows to symbolize the original 13 states in its left, while clutching in its beak a white scroll inscribed with the motto "E pluribus unum" (Latin for "Out of many, one").

Behind and above the eagle, there's a background of "radiating glory," in the form of rays of light crossed by an arc of 13 cloud puffs, below which there's a constellation of mullets argent, or five-pointed compass stars. That image is surrounded by a ring of white stars symbolizing the current number of U.S. states, and around that another circle, with the message "Seal of the President of the United States."

Though the presidential seal's precise origins are unclear, it was clearly inspired by the Great Seal. That national symbol was adopted by the Continental Congress in 1782 after Secretary of the Continental Congress Charles Thomson merged ideas from several committees into this sketch, which subsequently was modified slightly by heraldist Thomas Barton. (That's according to the State Department's 1976 official history of the Great Seal, written by Richard S. Patterson and Richardson Dougall.)

But at some point, U.S. presidents decided that, like the British monarch, they needed their own personal coat of arms as well. The Great Seal "was the official symbol of the United States federal government, not the office of the presidency," says Matthew Costello, senior historian for the White House Historical Association and author of this article on the history of the presidential seal, in an email. "As such, some presidents simply used the Great Seal, while others thought that the president should have their own distinct seal."

As Costello details in his article, at least several presidents in the 1800s created their own seals, incorporating whatever flourishes appealed to them. James K. Polk, for example, used his own seal on the proclamation of war against Mexico in 1846. Millard Fillmore came up with his own slightly different version, which he sent to Maryland postmaster and engraver Edward Stabler to make in 1850. Lincoln used a personalized seal as well.

A presidential seal didn't actually appear on an invitation to an event until 1877. According to Patterson and Dougall, President Rutherford B. Hayes, who was hosting a dinner honoring Russian Grand Duke Alexis Alexandrovich, made the invites look fancier by emblazoning them with a seal that featured an arc of clouds, rays and stars between the eagle's wingtips. But the Hayes eagle was thinner and scrawnier than today's robust-looking eagle, and its head was turned toward the bundle of arrows, rather than the olive branch.

In 1902, President Theodore Roosevelt ordered yet another presidential seal to be installed on the floor of the White House Entrance Hall, according to Costello's article. He commissioned a French-American sculptor, Philip Martiny, to create a new one. Martiny drew upon the Hayes design, but added a few changes, including engraving the phrase "The Seal of the President of the United States" in a circular border. (Truman, who didn't like Martiny's work, had it removed and moved elsewhere in the White House.)

During World War II, President Franklin Roosevelt, who was fascinated with insignia, asked experts to redesign the presidential seal. They came up with the idea of adding a ring of stars to represent all the states, and having the eagle face the olive branches, rather than the arrows, to emphasize the desire for peace rather than war, as this video from the Obama Administration's archives explains. That design was the one that Truman approved in 1945, and it's been used ever since. In 1959 and 1960, President Dwight Eisenhower updated it by adding stars for Alaska and Hawaii.

Now That's Interesting
Charles Leazott, graphic designer and proprietor of an online store, created the fake presidential seal accidentally used as a Trump's backdrop. He says in an email that he's received violent threats as a result of the incident, as well as "some generally vile messages filled with hate and vitriol." Nevertheless, he says, "People took it for what it was. A humorous joke at the expense of the President. That's a tradition that goes all the way back to the founding of our country. I think it's important for people to keep their perspective."

Baboons: The Monkeys With the Scarlet Booties 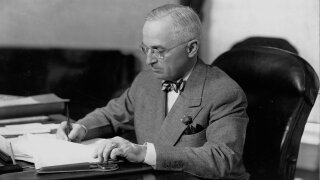 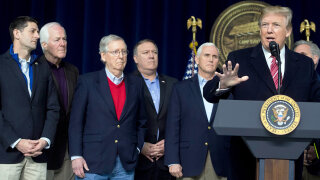 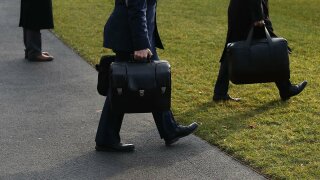 Does President Trump Really Have a Nuclear Button?