The First Family and the White House 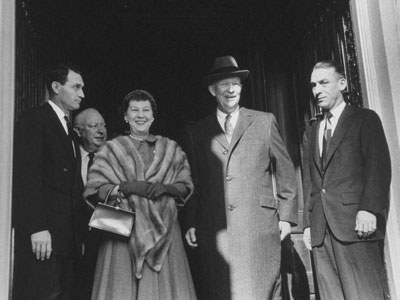 Mamie Eisenhower, wife of President Dwight Eisenhower, was known as a sterling hostess to the unprecedented number of heads of state who visited the White House during the administration.
Paul Schutzer/Time Life Pictures/Getty Images

Presidents generally take every effort to keep their families out of the limelight afforde­d by the office, though they're not always successful. The American press has always held a fascination with the first family; a president's family directly reflects on his ability to lead and the moral guidance he's expected to give the nation. As such, some first ladies have helped to frame their husband's character for the nation. Sarah Polk and Lucy Hayes, for example, both banned liquor in the White House in the mid-19th century.

Some presidential children have found themselves the subject of tabloid fodder. Jenna Bush, daughter of President George W. Bush and granddaughter of President George H.W. Bush, made headlines when she was arrested for underage possession of alcohol at age 19 in 2001 [source: Roiphe]. Others have been targeted simply because they're their parents' children. President Bill Clinton's 13-year-old daughter Chelsea was famously referred to as a "dog" by conservative talk host Rush Limbaugh in 1993, much to the public's distaste [source: Ivins].

­While some have remained content to quietly support the president, first ladies have sometimes played very public and vital roles during their husband's administrations. Perhaps the most celebrated first lady, Eleanor Roosevelt, wife of President Franklin Roosevelt, helped guide the nation during the Depression and World War II. Reports of her rationing food in the White House showed the nation the administration felt their pain. She was also an outspoken advocate of civil rights and admitted she felt a duty to use her unique access to the president to help the nation.

They also can play a role in policy. Nancy Reagan helped bolster her husband President Ronald Reagan's War on Drugs by launching her own "Just Say No" campaign. The overwhelmingly successful public relations blitz targeted American children and taught an entire generation about the pitfalls of drug use. President Bill Clinton's wife Hillary took the first lady's involvement to new heights with an ambitious federal health care program. Though the initiative was defeated by a Republican Congress, the first lady actively pushed the legislation on Capitol Hill, meeting with lawmakers to convince them to vote for the program.

The first family's official residence, the White House, is located at 1600 Pennsylvania Ave. in Washington, D.C. It wasn't until the administration of John Adams that the residence served as the home to the president and his family. The building was painted white to cover the scorch marks left after British troops set fire to it in the War of 1812. It was first opened to the public by President Thomas Jefferson after his inauguration in 1805. The custom continued until President Andrew Jackson's inauguration in 1829, when 20,000 citizens overran the home and had to be lured out with bathtubs filled with whiskey on the front lawn [source: White House].

Over the years, some first ladies have renovated the White House during their husband's tenures. President Harry Truman's wife Bess completely gutted the residence, and the renovation lasted almost the entire administration, from 1945 to 1953. President John Kennedy's wife, Jacqueline, famously redecorated the White House and gave a televised tour to the nation in February 1962. Three out of four Americans tuned in to watch [source: MBC].

The White House has also served as the setting for several weddings. Twenty-three first children or grandchildren have been married in the White House, beginning with President James Monroe's daughter Maria in 1820 and most recently President George H. W. Bush's daughter Dorothy's wedding in 1992.

­Holding a wedding in the White House is only one perk the president is afforded. Read the next page to learn about other presidential perks.