How did the advent of television impact politics? 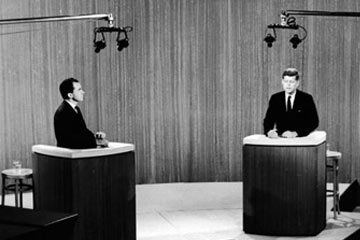 In 1959, a young senator wrote an article for a young magazine called "TV Guide" trumpeting the potential for the new medium of television to permanently change the way politics worked. In a little more than a year, that same senator, John F. Kennedy, would be elected president of the United States, thanks in no small part to his charismatic performance in a series of televised debates with opponent Richard Nixon and a TV ad campaign that featured some catchy jingles. Three years later, news coverage of Kennedy's assassination would captivate the country, becoming one of the first major tragedies covered by network news [source: Kaid]. By that time, television's place in shaping the political landscape was undeniable.

Television gave elected officials and candidates for office an unprecedented way to speak directly to millions, face-to-face [source: Dover]. Of course, it didn't take long for that direct contact to be mediated, mostly by the network executives, producers and reporters who put together nightly news programs. Trends like sound bites, talking heads and the dramatic nature of television news coverage have led critics to accuse TV of creating a less factual, more negative form of political coverage [source: Smoller].

Studies have shown that since the advent of TV, the American voting public has become increasingly disenchanted with politics [source: Kraus]. Except for spikes in the 2004 and 2008 elections, voter turnout has steadily declined since 1960, the year the first televised presidential debates were held [sources: Gans, The Museum of Broadcast Communications]. Some argue that the increasingly negative tone of ads and political commentary has driven many to abandon interest in politics [source: Kraus]. TV has also driven a decline in party identification, replacing political parties as the entity in control of political information, as they were in the 1900s [source: Kaid].

On the other hand, the introduction of cable news channels like CNN and Fox News, with their 24-hour coverage, has expanded the scope of political reporting. With so much more air time than nightly newscasts, those channels can provide political coverage with an unprecedented level of depth [source: Smoller]. Those that are politically active today could be considered more engaged than ever. Then again, there are just as many critics who would argue that the cable networks' increasing stress on images, photo ops and sound bites over the issues has driven the level of political discourse into the gutter [source: Smoller].

It may be impossible to say for certain whether TV has been good or bad for American politics. But, to find out about some concrete changes that television has made since Franklin Roosevelt became the first president to speak on television on April 30, 1939, read on [source: Foote]. 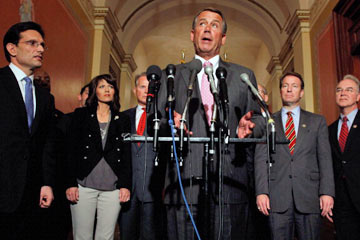 Congressional leaders like House Speaker John Boehner often use the press to help get across their messages to their constituents and the American public.
Chip Somodevilla/Getty Images

Since the invention of TV, the executive branch has become more and more powerful, thanks partly to New Deal policies that created and expanded many federal agencies [source: Kaid]. TV has contributed to that increase in power by making the president more visible and therefore more a part of people's everyday lives. With that visibility comes the power to garner support for his policies (as long as he's popular enough). For example, riding a tide of popularity from his recent election, in 1981 President Reagan made a televised address urging citizens to support a tax and budget package that had stalled in Congress. After the address, congressional leaders received a flood of letters and phone calls in support of the president, and Reagan got his package through [source: Foote].

According to a survey from the 1990s, the average network newscast spent 20 percent of its time throughout that decade discussing the president, and a full 97 percent of broadcasts featured at least one story on the commander-in-chief [source: Smoller]. Because TV is a visual medium, it's easier for newscasts to focus on one person, like the president, than several hundred members of Congress [source: Smoller]. Traditionally, the president can ask for free broadcast air time to push his agenda and comment on important events, while congressional leaders usually have a hard time getting the same consideration, except during high profile events like the State of the Union address [source: Foote].

The TV news cycle has also changed the pattern of presidential announcements. Big news is generally released by 2 p.m. in hopes that it will become the top story on the evening news. News the administration wants to keep quiet typically comes out over the weekend hoping something else will distract the attention of news producers by Monday [source: Malcolm].

Congress has had its share of changes brought on by TV, too. Television coverage of high profile hearings, like Joe McCarthy's House Un-American Activities Committee in the 1950s, or the Watergate hearings in the 1970s, have given certain members of Congress extremely public platforms for their views [source: Foote]. C-SPAN, a cable channel that has been broadcasting all open sessions of both houses of Congress since the 1980s, has led to debates becoming more theatrical, with members accusing each other of going over the top for the cameras. But theatrical or not, televised congressional proceedings have increased the level of transparency between the U.S. government and the people [source: Kaid].

TV has also changed the way political news is packaged. With large amounts of time to fill, 24-hour news stations have introduced analysis by spin doctors and talking heads to fill the schedule. Spin doctors, usually paid professionals working for one party or another, try to spin the news in favor of their side. Talking heads, independent of party control, usually lean one way or the other, and offer their take on recent developments [source: Smoller].

Analysis has become so common that much of the actual political news, like speeches or news conferences with politicians, has been reduced to sound bites, which are, on average, only 9.8 seconds long [source: Hart]. News producers anxious to keep broadcasts fast-paced will take one key snippet from a much longer series of remarks [source: Smoller]. That gives news producers a huge amount of power over how the public digests political events.

Looking at trends like sound bites and talking heads, many media analysts have criticized TV for dumbing down political discourse. News coverage of elections, for example, usually focuses on "horse race" developments like movements in the polls to determine who is winning. The news is less likely to focus on in-depth discussion of candidates' platforms [source: Dover]. Given TV's visual nature, scenes of carnage after the bombing of a foreign country tend to be more powerful than a president's carefully written speech about the necessities of war [source: Smoller].

In recent years, savvy political advisers have taken advantage of the power of TV and the talking heads to get their candidates' messages across. For example, top George W. Bush adviser Karl Rove used skillful control over the media message to help win two elections for Bush, and create momentum for controversial policies like the war in Iraq. Brilliant or diabolical, depending on which side of the political spectrum you fall, Rove used a network of conservative columnists, analysts and commentators to spread the administration's message on TV news and in print through talking points [source: Silverblatt]. Ronald Reagan's communications team pioneered a similar strategy, using "lines of the day" to keep administration officials and conservative commentators on message [source: Smoller].

At its best, TV can serve as a watchdog, keeping government officials accountable. One famous example is when respected news anchor Walter Cronkite presented a special report on the Vietnam War in 1968. Today, many historians look to the moment Cronkite called the war a "quagmire" as the beginning of a larger shift in public opinion against support for Vietnam [source: Hart]. Keep reading for more information on how TV has impacted politics.