Domestic Responsibilities of the U.S. President 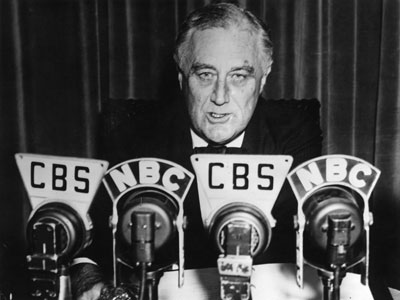 President Franklin Roosevelt addresses the nation in Oct. 1939, during one of his fireside chats.
Topical Press Agency/Getty Images

Throughout his administration, President Franklin Roosevelt held what he called fireside chats, regular radio addresses to Americans explaining recent political decisions and new ideas for the country. The fireside chats overwhelmingly contributed to the immense popularity Roosevelt enjoyed during his tenure as president. He was the only president elected four times.

Roosevelt personified one of the major roles the president is expected to fulfill, that of leader of the nation. Before Roosevelt, President Andrew Jackson solidified the president's position as protector of the citizens. He took on established political and economic concentrations of power, which he felt unfairly balanced wealth and policymaking in favor of an elite stratum. Not all presidents have fulfilled that role, but in one form or fashion, all have led the country in the direction each saw fit.

­Th­e domestic responsibilities of the president fall largely into two categories: economy and the law. The president ensures the laws of the United States are carried out. This is why federal regulating agencies like the Federal Trade Commission and the Securities and Exchange Commission (SEC) fall under the authority of the executive branch. Both were created to oversee sectors of the United States to ensure laws are being followed, with the Justice Department serving as the prosecutorial division of the executive branch.

Presidents also may oversee the creation of new regulatory bodies; President Woodrow Wilson oversaw the creation of the Department of Labor (which created a new Cabinet position). The department enforces the federal minimum wage and regulates business to ensure eight-hour workdays and child labor laws are being observed. In effect, President Wilson wrestled rights for American workers from industry.

The other major aspect of presidential domestic policy is concerned with the economy. A president's legal activity immensely but indirectly affects the economy. Presidential responsibilities, such as creating the national budget, proposing legislation that increases or cuts taxes and levying tariffs on imports and exports much more directly, impact the economy and the lives of all Americans.

Creating a national budget is a huge undertaking, which requires a huge staff (more on that later). Within the budget, the funding for all programs, services, military activities and recent legislation is spelled out in detail. The choices made for funding of programs affects enormous sections of Americans; for example, an increase of defense spending may lead to a decrease in welfare programs. The president's decision on spending also can lead to an increase in taxes.

As in times of war, when the United States faces an economic crisis, the president has taken more power due to the responsiveness and decisiveness of the executive branch. During the Great Depression, Franklin Roosevelt created new programs to alleviate widespread poverty and unemployment. Many of these programs approached socialism, like the Works Progress Administration, which created federal jobs for American workers. In 2008, George W. Bush largely took control of the sinking economy, directing the Federal Reserve Bank to issue massive loans and the Treasury to purchase stakes in failing major corporations.

Not all presidential policies fit neatly into a domestic category. Some walk the line between domestic and foreign policy, like the president's ability to negotiate tariffs with other nations. These tariffs can affect U.S. importers and exporters by increasing the taxes they pay on goods shipped in and out of the country. But tariffs can also extend U.S. aid to struggling nations by eliminating a tariff, or penalize hostile nations by increasing a tariff, creating an embargo or freezing their economy from a vast consumer market.

Read about more foreign policy responsibilities on the next page.