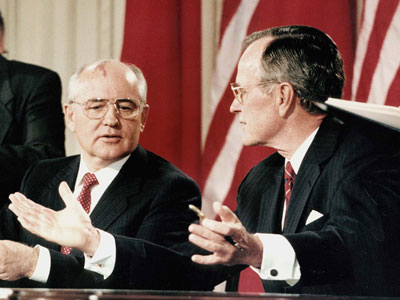 When President Ronald Reagan took office, one of his highest priorities was to carry out the War on Drugs declared by Richard Nixon. President Reagan beefed up funding for the Drug Enforcement Agency, lobbied Congress to create legislation that increased prison sentences for offenders caught with the emerging drug crack cocaine, and he negotiated with the foreign nations where drugs were funneling out of into the United States.

Reagan created new extradition treaties with Central American governments that allowed foreign drug dealers, like the Medellin cartel out of Columbia, to be tried in American courts. Official corruption in foreign nations didn't extend into the United States, though the U.S.'s legal arm now reached outside of the nation's borders.

Creating treaties is a Constitutional power afforded to the presidency, and George Washington solidified the president's authority in negotiating with other nations. Washington established the use of treaties, leaving it to Congress to approve them. For the most part, Congress has complied. The United States currently has extradition treaties with more than 100 countries because of presidential negotiations [source: McNabb Associates]. In addition, the United States is a member of NATO, the United Nations and a host of other international organizations because presidents saw fit to join and lobbied Congress to approve the treaties. Conversely, if a president decides a treaty isn't in the best interest of the nation, the decision rests solely in his or her hands as seen in President Bill Clinton's decision not to sign the Kyoto Treaty on climate change.

­The president also acts as head diplomat for the United States­. He or she is responsible for visiting foreign heads of state to press U.S. policy and to maintain good foreign relations. The president, in the eyes of other nations, serves as the figurehead for the entire country. This is a double-edged sword; the president can be beloved by residents of foreign nations or hated. It's a rare scene indeed where foreign protesters burn Congress in effigy.

Much of how the United States decides to react to international affairs has been molded by presidential decisions. The U.S. policy of leading the Western Hemisphere (created by James Monroe) was added to by the (Theodore) Roosevelt Corollary that allowed the United States to intervene in the affairs of the rest of the Americas. The Truman Doctrine made the United States essentially the police of the world, and the (George W.) Bush Doctrine of preemptive war gives the United States license to strike unprovoked against foreign nations it perceives as a threat.

Find out about the president's staff support on the next page.