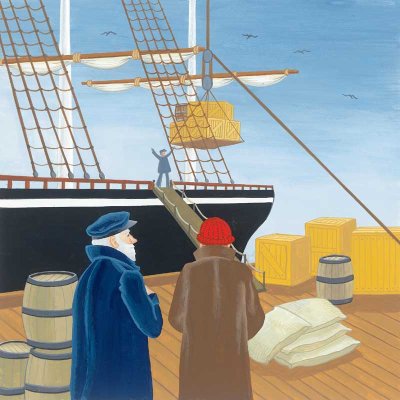 Robert and the captain watched th crew load the cargo onto the ship.

Robert's breath came out in white puffs as he spoke. "That should be the last of all the cargo, Captain," he said. "We should be right on schedule."

Robert and the captain stood on the pier, watching their crew load the remaining crates into the hull of the long freighter. Icy wind whipped in from the ocean and whistled across the wooden planks below Robert's feet. Robert huddled down in his jacket and licked the salty mist from his lips.

Robert was the ship's first mate, the captain's right hand man. But this was his first trip to Newfoundland, and he wanted to be prepared.

"Do you think we'll run into any problems, sir?" he said.

The captain gazed out across the choppy gray water. "I've made this voyage many times, Robert. No two journeys are the same. This time of year, we'll have to remain alert. We can't let our guard down. Icebergs flow down from the north. Our ship is sturdy, but it would shatter against an iceberg. You need to be ready for icebergs."

Robert and Captain Connor boarded the ship. They climbed to the bridge and settled into their desks. The captain recorded their departure in the ship's logbook while Robert began his navigational calculations.

After about an hour, the captain stood up and stretched. "Robert, I need to go below to chart the ship's position," he said. "I am leaving you in charge of the bridge."

The ship was far out at sea. Their best helmsman, O'Brien, was at the wheel. Robert had nearly finished his navigational calculations.

Robert set back to work and finished the calculations. Now all he had to do was ask the captain for the ship's position.

Robert set down his instruments and rubbed his eyes. When he looked up, he was startled to see Captain Connor had returned to the bridge. The captain was at his desk, scrawling in the

Robert picked up his instruments and studied his calculations.

"Can you confirm the ship's position, sir?" Robert asked.

The captain did not answer.

"Captain?" asked Robert, still glancing through his calculations. "Can you confirm the ship's position?"

Again the captain did not answer.

"That's odd." Robert frowned. "O'Brien, did you see the captain sitting at his desk just now?"

The helmsman shook his head. "No. The sea's too rough. I haven't taken my eyes off it."

Robert left his desk and walked across the bridge to where the captain had been sitting. The logbook was still open on the captain's desk. Robert read the latest entry:

Robert stared at the captain's words. "Ten degrees? That changes our course completely. Why didn't he say something?"

Robert looked all over the ship. Finally, he looked in the infirmary. He was surprised to see the captain there. A bandage covered the captain's head.

"Captain! Thank goodness I found you," said Robert. "I changed course as you requested."

The captain frowned. "As I requested?"

"Yes, sir," said Robert. "I saw your note in the ship's log. I ordered O'Brien to tack ten degrees northwest."

The captain stared at Robert. "I recorded nothing in the log," he said. "And I didn't go back up to the bridge. I hit my head when I was climbing down the ladder to the chart room."

Now it was Robert's turn to stare. "Sir, I saw you. I saw you at your desk. I saw what you wrote in the log." He stopped. "The log! Captain, I can prove what I'm saying. I'll be right back."

Robert raced from the infirmary and climbed the ladder to the bridge.

Robert bounded towards it. He ran even faster. He saw O'Brien leaning on the wheel. He was steering the ship away from an iceberg that loomed above the port deck.

"Thank goodness the captain ordered us to change course when he did," said O'Brien. "We would've hit her head-on."

Robert watched as the ship slipped past the ice. It was so close, Robert could nearly reach out and touch it.

When there was no more danger, Robert snatched the ship's logbook from the captain's desk and hurried back down to the infirmary.

"There, sir," Robert pointed at the last entry in the logbook. "Isn't that your handwriting?"

The captain studied the book. "It's my handwriting, all right, but I never wrote this!"

As Captain Connor studied his logbook, he remembered his dream about the iceberg.

The captain sat straight up in bed. "My dream! I had a dream. In my dream I saw an iceberg. The ship was headed towards it. I knew we were going to hit it. I tried to tell you, Robert. I wanted you to change course, but I just could not get your attention."

Robert stared at him. "And in your dream, Captain, when you couldn't get my attention, what did you do?"

The captain's face went white. "I did the only thing I could do," he said. "I wrote 'tack ten degrees northwest' in the logbook."

ABOUT THE AUTHORS AND ILLUSTRATORS:

"The Mystery on the Sargasso" Written by Lynne Suesse, Illustrated by Jan Gregg-Kelm

"The Monkey's Paw" Based on the original story by W. W. Jacobs, Adapted by Lisa Harkrader, Illustrated by John Kanzler

"The Mummy" Written by Renee Deshommes, Illustrated by Patrick Browne

"Dracula's Secret" Based on the original story by Bram Stoker, Adapted by Elizabeth Olson, Illustrated by Jeremy Tugeau

"Dr. Jekyll's Diary" Based on the original story by Robert Louis Stevenson, Written by Amy Adair, Illustrated by David Cooper

"Night Coach" Based on the original story by Amelia Edwards, Adapted by Lora Kalkman, Illustrated by Jeffrey Ebbeler

"Interview with Dr. Frankenstein" Based on the original story by Mary Shelley, Adapted by Brian Conway, Illustrated by Fabricio Vanden Broeck

"The Banshee and O'Doud" Written by Lynne Suesse, Illustrated by Frank Sofo