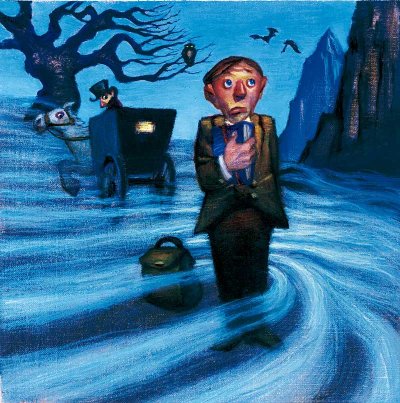 Galloping horses pull a coach along a dark road. The driver shouts to his passenger. "We will arrive at the castle soon," he says. "I'll drop you off and leave at once. I must get out of these woods before the moon rises. Strange things happen around here during the full moon."

"When the moon is full," says the driver, "wolves prowl about and bats fly the skies. The wolves and bats travel with vampires."

"There's no such things as vampires," says Jonathan.

Jonathan sits back in the coach. He is too tired to be scared. He has been traveling for weeks.

Jonathan carries a packet with a secret document from London. His boss, Mr. Hawkins, asked him to give the document to Count Dracula of Transylvania.

"Whoa!" shouts the driver. The coach stops. Jonathan steps out. In front of him is a dark castle with an iron door and several towers. "Here's your stop, the castle of Count Dracula."

Before Jonathan can thank the driver, the coach speeds away.

Jonathan pulls the rope next to the door. The bell rings -- ding-dong. A man in an elegant suit stands in a dark hallway.

"Welcome to Transylvania, Mr. Harker," he says. "I've been expecting you." Count Dracula steps forward and shakes Jonathan's hand. The strength of the grip scares Jonathan. A chill travels up his spine.

"Thank you, Count Dracula," says Jonathan. The count's skin is as pale as the full moon, which rises in the sky. Jonathan hears a wolf howl in the distance. Bats flap overhead.

"Listen to the welcoming sounds of the night," says the count.

Jonathan shudders. "You have an interesting country," he says.

"You must be very hungry after your long journey," says the count. "Come. Dinner is ready."

Jonathan follows the count to the dining hall. Heaping plates of food are on the table. He forgets his fear and sits down. From his place at the table, the count watches Jonathan. The count's plate is empty. He does not eat.

"I will eat later," says the count. The count smiles. Two sharp, white teeth glimmer in the candlelight.

After dinner, the count shows Jonathan to his room. "Sleep as long as you like," says the count. "I won't be home tomorrow until after dark."

"Thank you for your hospitality," says Jonathan. "Before you leave, I have something for you." Jonathan gives the packet to Count Dracula. "This packet contains a secret document from my boss, Mr. Hawkins."

Dracula smiles widely. He takes the packet. "Ah, yes," he says. "I have been waiting a long time for this."

That night Jonathan does not sleep well. Howling wolves and flying bats haunt his dreams.

The next day, Jonathan explores the castle. He tries to open the other doors along the hallway. They are all locked.

Finally, he tries a heavy door at the top of the stairs. The rusty latch breaks in his hand. The door swings open to reveal a stairway. He follows the twisting stairs deep beneath the castle. At the bottom, he enters a dark, earthen room lit by torches. Several wooden boxes rest on the floor.

Puzzled, Jonathan kneels near one of them. He slowly pulls back the lid. He almost screams. The box contains Count Dracula. He is a vampire.

Jonathan runs from the room. He races up the staircase. Back in his room, he quickly packs his bag. "I must leave this place at once," says Jonathan. Through his window, Jonathan sees the sun is low in the sky. "Night will be here soon. I must have slept for most of the day."

Jonathan runs to the iron door at the castle entrance. Three wooden beams cross the door. "The count has locked me inside the castle!" shouts Jonathan. "I am a prisoner. But I am smarter than he thinks. I will escape."

Jonathan looks around the dark hallway. He sees the count's lamp on a table. By the light of the flickering flame, Jonathan searches the walls.

At last he finds a bin below a small door in the corner. "This must be for the coal deliveries," says Jonathan. He turns the door's tiny knob. The door swings open. Quickly, Jonathan squeezes through the door. He falls to the ground on the other side.

Just then a wolf howls in the distance. Bats fly from the castle towers. The sun begins to sink below the trees. "I must leave at once. This is a very strange land. Vampires sleep by day and walk at night."

Jonathan sees a horse near the castle walls. He jumps on the horse's back. The frightened animal gallops from the castle, carrying Jonathan to safety.

After many weeks, Jonathan arrives back in London. His wife, Mina, is happy to have him home. "I'm so happy you are with me once again. Strange things are happening in London. I do not want to be alone," she says.

"What has happened?" asks Jonathan.

"Bats have been flying over the city," says Mina. "I hear wolves howling."

"Bats and wolves in London?" asks Jonathan. "That's silly. Bats and wolves live in Transylvania, not London. There must be some logical explanation. My poor Mina, why don't we go to the theater tonight? That will take your mind off such strange things."

"Maybe you are right," says Mina.

Jonathan and Mina dress in evening clothes. They attend a play. Then they stroll along the city sidewalks.

"What a fine play," says Jonathan. "What a lovely night, too."

"You were right," says Mina. "I do feel better. Look at the full moon. Isn't it just beautiful?"

Jonathan and his wife pass Count Dracula on the sidewalk.

Just then a man in an elegant suit passes them on the sidewalk.

Jonathan cannot believe his eyes. The count is in London. "Mina," says Jonathan, "I must visit my boss, Mr. Hawkins. I have an urgent question to ask him. But, first, I will take you home."

"You are acting strangely," says Mina. "I hope everything is okay."

Jonathan walks Mina home. He then runs to Mr. Hawkins's house. As he knocks on the door, Jonathan hears a wolf howl. Bats fly across the night sky. Jonathan shudders.

"I'm sorry for the lateness of the hour, sir," says Jonathan. "I must know the meaning of the document I gave Count Dracula."

Mr. Hawkins tells Jonathan the meaning of the secret document.

"Is that all? Count Dracula had requested that the document remain secret," says Mr. Hawkins. "But I can tell you now. The document you gave him shows that he owns a house in London. With that document, he can move here."

"You're going to have a new neighbor," says Mr. Hawkins. "Count Dracula bought the house right next to yours."

Learn the secret of a young woman's mysterious necklace in the next story, "The Red Ribbon."