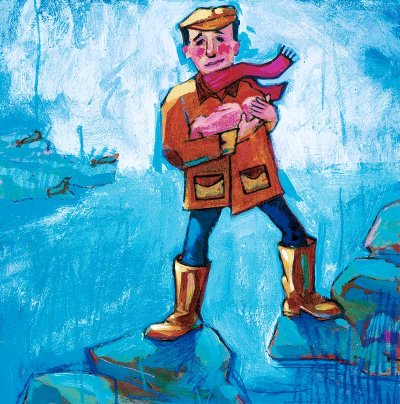 Martin picked up the baby and brought her home to his wife, Sela.

Martin threw his net over the side of his fishing boat. It fanned out like a giant spiderweb. As he waited for his net to fill with fish, he watched seals on the rocks. Martin pulled his net in, docked his boat, and began to walk home. When he passed the rocks, he noticed the seals had left a small bundle.

"It's a baby girl!" Martin cried. Next to the baby was a seal's skin.

"This must be a Selkie baby," whispered Martin. He had heard fishermen tell tales about beautiful creatures called Selkies. Selkies could change from a seal to a human by shedding their skin.

Martin cradled the baby in one arm and tucked the seal skin under his coat and ran home. He opened the door and yelled to his wife, "Sela! The sea gave us a baby."

Sela scooped the baby out of Martin's arms and said, "She's beautiful."

Martin did not tell Sela that Morgan was a Selkie child and might want to return to the sea when she grew up. Instead, he locked the little seal skin in a trunk in the attic.

Morgan grew up to be a beautiful child. Sela and Morgan spent the days swimming while Martin fished. Martin watched Morgan from his boat.

"She's almost as good a swimmer as her mother," Martin said. "I will tell Sela the truth about Morgan as soon as I return from my long fishing trip."

The day Martin left for his trip, a storm came up the coast.

Morgan stared out the kitchen window. "I'd like to go swimming."

"You cannot swim during a storm," Sela said. "It's too dangerous."

"I'm sure it's peaceful under the waves," Morgan said.

The next morning, Sela and Morgan found pieces of Martin's boat washed up on the beach. Martin never came home.

That night, another storm came up the coast. When Sela drifted off to sleep she heard a familiar voice whisper, "I can't rest until I tell you the truth!"

"Morgan!" Sela whispered with fright. She ran to Morgan's room. A bolt of lightning lit it up. The bed was empty. Sela searched every room.

When Sela stopped in front of the attic door, the doorknob slowly turned.

Trembling, she watched as the door creaked open. She whispered, "Morgan! Morgan! Are you in here?"

There was no answer, so she quickly shut the door and locked it.

"Morgan!" Sela cried. The wind was getting stronger. Sela ran down the steps. She peered through the kitchen window and saw Morgan standing on the rocks near the water.

Sela stumbled through the heavy wet sand on the beach. Thick storm clouds covered the moon.

"Mama," Morgan said. "Do you ever feel like you don't belong here?"

Sela shook her head and said, "I belong here with you."

Morgan and Sela walked back up to the house. When Sela went to the pantry to get Morgan a towel, she heard stomp, stomp, stomp above her.

"Someone is upstairs," Sela gasped.

Sela lit a candle. They tiptoed up the steps. The attic door was open.

"Mama!" Morgan cried. She peeked inside the attic.

A trunk suddenly slid towards her. She reached down and opened it.

Sela felt something cold and wet inside the trunk. She held it up. She saw a tiny seal's skin.

"Come with me!" Sela said. She grabbed Morgan's trembling hand and led her down three flights of steps to the basement.

Sela showed her daughter the secret of her past.

Sela moved a pile of boxes and found a large chest.

"I hid this here years ago," Sela explained. She pulled out a seal's skin.

"What is it?" Morgan whispered.

"This is your seal skin," Sela showed Morgan the smaller skin. "Your father must have known you were a Selkie. He just didn't know how to tell me."

Sela explained how she had fallen in love with Morgan's father when she was young. She hid her seal skin from him and gave up her seal life. "I always longed for the sea," Sela said to Morgan, "but I could never leave you. Tonight you will see just how peaceful it is under the waves."

Sela and Morgan ran to the beach and slipped into their seal skins. As they swam, they saw a familiar boat drifting along with the tide.

Sela and Morgan thought they could see Martin's boat out on the water.

Sela looked up and saw the ghostly figure of her husband standing on the boat's deck. A wave splashed over Sela and Morgan. When they wiped the water out of their eyes, the boat was gone.

Read about the doctor who tried to create a man in the next story, "Interview with Dr. Frankenstein."