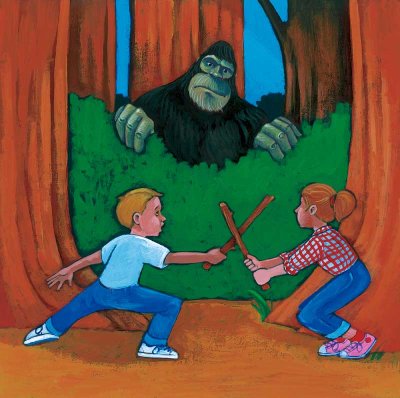 As Tim and Tanya were playing, the creatured stepped out from behind a tree.

One summer in 1966, Tim and Tanya Saunders went camping. In the woods, they saw many plants and animals they could not see in their neighborhood. They also saw something quite unusual.

Tim and Tanya were playing near their campsite. They saw something move in the trees. It was a giant, furry figure. It looked like it was watching them. Tim stepped closer to get a better look, but Tanya pulled him back.

Just then, the creature stepped out from behind a large tree. The brother and sister could see its huge arms and legs. Its whole body was covered with shaggy, brown fur. It stood on two feet, straight up and down like a human being. It sniffed the air and looked at them curiously with its big black eyes.

Tim and Tanya screamed and ran as fast as they could to find their mom and dad. When they returned with their parents, the creature was gone. All that was left was a single footprint.

It was a huge footprint, twice as big as Tim's or Tanya's footprint. It was not left there by a regular man. It was not like any animal's tracks either. Only a very large, very heavy creature could leave a footprint that big and deep.

What Tim and Tanya saw in the woods is called a Bigfoot. Many people have been searching for Bigfoot.

Nearly two thousand people have told stories like Tim and Tanya's. All of these people saw a furry giant that looked like an ape. The creature stood up like a human and walked on two feet.

Most of the reports about Bigfoot occurred in the woods of California, Oregon, Washington, and Canada. Some stories go as far back as Indian times. Long ago, the Salish Indians told stories about the "Sasquatch." This name means "wild man of the woods." But there is still no definite proof that the creature actually exists.

Bigfoot tracks look similar to human footprints, but are larger and heavier.

Many Bigfoot tracks have been found in the woods. The footprints look like human footprints, but are much larger and deeper. They are all around fourteen to eighteen inches long and five to seven inches wide.

Scientists say that any creature who made a footprint like that would be nearly eight feet tall and weigh up to eight hundred pounds!

Some people have gone to the woods to find a real Bigfoot. Some Bigfoot "hunters" brought photos back. Experts who looked at the photos cannot tell if the creatures in the photos are real or fake.

In 1967, Robert Patterson brought a movie camera to the woods. His famous film shows a female Bigfoot who is about seven feet tall and weighs about three hundred pounds.

Patterson's short film is the best evidence of a Bigfoot. Some scientists think the Bigfoot in the movie is a man dressed in a furry costume.

Many scientists who believe in Bigfoot think the creature is a relative of the caveman. It is halfway between a man and an ape. It looks like an ape but walks like a man.

These scientists say there is no reason to be afraid of Bigfoot. These creatures are shy and keep to themselves. That is why they live deep in the woods, away from people.

Many other scientists do not believe in Bigfoot. They say the photos and the footprints are not strong enough proof. They want to see bones or even a real Bigfoot! Until then, they will think Bigfoot is a myth, a story, or a legend.

Photographs and films of Bigfoot are beginning to build evidence for the creature's existence.

Bigfoot stories are very real to people who have seen these creatures. Tim and Tanya Saunders, the boy and the girl who saw Bigfoot, think what they saw was real. People might think they made it up as a story. But Tim or Tanya will never forget the day they saw Bigfoot.

Read about what happens when a skeptical reporter, nicknamed "O'Doubt," comes face to face with a mythical creature in the next story, "The Banshee and O'Doud."