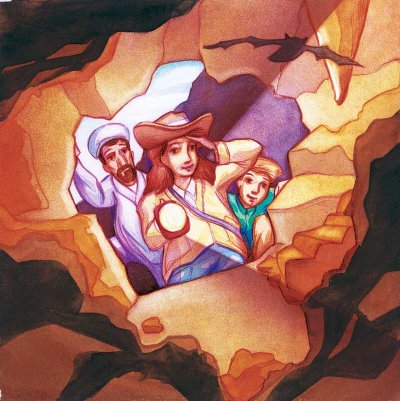 Judsen takes her son, Davis, on his first dig in Egypt.

Judsen was a famous archaeologist. She had been exploring tombs with her father since she was a little girl. Now she would take her son, Davis, on his first dig far away in Egypt.

Judsen had received a map from her friend Rashidi. The map showed Judsen where to find King Elysian's tomb. Judsen and Davis would meet Rashidi in Egypt and travel to the tomb together.

"That's how old I am!" said Davis excitedly.

"King Elysian became ill soon after he began his reign," Judsen explained. "He died just before he turned eleven."

Davis listened intently to his mother's story. "The people buried King Elysian in a secret tomb," she explained. "They also buried maps in the tomb. These maps may help us find other secret kingdoms and hidden jewels."

Soon the airplane was flying high above the clouds. Judsen remembered something she did not tell Davis. Rashidi had translated a secret message on the map. It read, "Those who disturb this tomb will be cursed forever."

Finally, the plane touched down in Egypt. Rashidi was waiting at the airport. "Welcome to Egypt," he said. "Are you ready to find King Elysian's tomb?"

As they grabbed their bags, a man approached Judsen.

"Are you the one looking for King Elysian's tomb?" he asked.

"Yes, but how did you know?" answered Judsen.

"Everyone is talking," he replied. "You must not disturb the tomb. The only person to find the tomb disappeared the next day. No one saw him again."

The man left and disappeared into the crowd. "Is that true?" asked Davis.

"I don't believe it," Judsen said. "King Elysian has been dead for thousands of years. How can a mummy put a curse on us?"

Rashidi led Judsen and Davis out of the airport. Soon they were heading for the desert. Three camels were waiting for them. They climbed onto the camels' backs and rode across the desert.

Rashidi and Judsen looked at the map many times. They made many twists and turns. Davis did not know which way they were heading.

Soon they came upon an opening to a cave. "This is it!" shouted Judsen. The three explorers jumped off their camels and ran to the opening. Judsen pointed her flashlight into the hole.

Judsen led the way and climbed down into the cave. They were amazed by all the maps and ancient drawings carved into the walls.

"Mom, what does that say?" asked Davis.

"Those are hieroglyphics," said Judsen. She copied all the pictures in her notebook. "I'm not sure what they say. Rashidi can translate them."

Judsen stopped and studied each picture. She recognized the pictures from the map. They made her feel a little uneasy.

"Davis," she said, "please do not disturb anything." Judsen was backing up to shine her flashlight on the wall. Suddenly she heard a loud crash.

Judsen carefully put the jewels back where she had found them.

"Oh, no!" said Judsen. She looked down and found an ancient urn filled with jewels. The jewels had scattered across the ground.

"You must leave everything just as you found it," warned Rashidi.

Judsen and Davis scrambled to pick up the jewels. They carefully put the jewels back in the urn. Judsen felt around on the ground for any loose gems. It was very dark in the cave. Judsen did not see that a diamond had rolled into the corner.

"I think we found them all," said Davis.

Judsen pointed her flashlight down a long corridor. Every few feet, Judsen would stop and copy the pictures into her notebook. Davis began to think the hallway would never end. But soon it emptied into a round room.

"There it is," whispered Davis. Judsen's flashlight stopped on a very small mummy. Davis stood next to the mummy. He ran his hand over the top and then touched his head.

Judsen noticed the hieroglyphics etched into the rock right behind the small mummy. One showed a young king taking a drink. Another showed the king falling down. Judsen copied these pictures into her notebook, too.

Soon Judsen was finished drawing. "It's time to go," she said.

This time, Rashidi led the way with his lantern. At the opening, Judsen stopped and looked up. She saw hieroglyphics above the opening of the cave.

"I didn't see these earlier," she said. "Rashidi, what do these pictures mean?"

Rashidi held his lantern near the pictures and shook his head. "They are a warning to all visitors," he said. "If anything is disturbed, a curse will follow."

Judsen thought about the jewels in the urn. Then she helped Davis climb out of the cave.

The sun was setting in the sky. "We will ride back to my village. You can stay there tonight," Rashidi said.

The three explorers climbed back onto their camels and set out across the desert. It was a long ride. Davis could not keep his eyes open. He leaned onto the camel's neck and fell asleep.

"We are here," said Rashidi. It was a small home made of stone. Rashidi tied their camels up to a tree. Judsen helped Davis get down. She carried him inside and put him in bed.

Then Judsen and Rashidi studied Judsen's notes from the tomb.

"These pictures show the king," said Rashidi, "and how he died."

"It looks liked he drank something that made him sick," said Judsen.

Davis was running a fever.

Just then, they heard Davis cry out. Judsen rushed into his room. She felt Davis's forehead. It was very hot.

"Rashidi," she called, "please find a doctor." Rashidi ran out in the darkness. Soon he returned with another man. The doctor examined Davis, but he could find nothing wrong with the boy.

"This is the curse of King Elysian," he said. "You have disturbed his tomb, and he is angry."

Judsen remembered the jewels she knocked over. "Maybe I didn't pick them all up," she thought. Then she remembered all the pictures she copied into her notebook. "I must return to the tomb," she whispered.

By daybreak, Judsen was back at the cave. She climbed into the opening and read the hieroglyphics above her head. The same pictures were still there. Judsen searched the ground for missing jewels.

Suddenly, she noticed something twinkling in a corner of the cavern. There was a sparkling diamond! Judsen quickly returned it to the urn. Then she carried her notes and sketches down the long corridor.

Judsen looked at the king's tomb once more before she left.

In King Elysian's tomb, Judsen left the papers at the foot of the mummy. She shone her flashlight on the mummy's face. Judsen took one final look at the boy king.

"You may be small, but you are very powerful," she said.

She followed the corridor to the cave's opening. When she looked up at the hieroglyphics, they were gone! The king's warning had vanished.

Judsen rode back to Rashidi's village. She was relieved, but not surprised, to see that Davis was healthy again.

"I'm ready to go on another adventure!" Davis said.

Small people can have big adventures. Go along for the ride in the next story, "The Teeny-Tiny Woman."