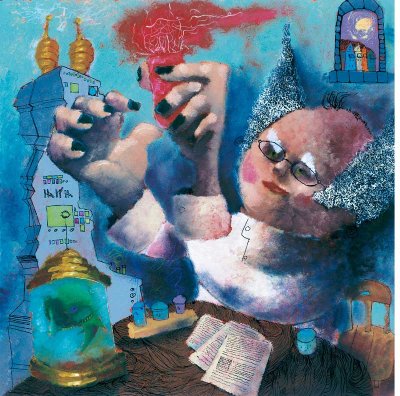 Dr. Jeckyll's formula would turn him into two different people.

I am going to write everything down. If he discovers it, he'll destroy it. He wants to get rid of me, so he can live forever.

Mr. Hyde is not far. No, I fear he will come at any moment. I have been in my laboratory for three days just waiting for him.

It all started about a year ago. Back then, I had a good life in London. I was a doctor. I helped many sick people.

The night my life changed forever, my butler Poole said to me, "Dr. Jekyll, you help so many people."

I smiled and thought, "If only he knew about my other side."

I ate my dinner alone that night. Then I quickly headed down to my lab.

I poured special powder into the glass. It turned green, then purple, and finally red. Steam rose from the glass and hung in the air like a cloud. The smell burned my nose. I held my breath. I drank it in one gulp.

Oh! The pain! My body shook. I cried out. Then the pain stopped.

I felt strange. I looked in the mirror.

I gasped! The eyes staring back at me were not Dr. Jekyll's wise brown eyes. The eyes in the mirror were gray and beady. My hair was wild. My teeth were crooked and pointy. I was ugly.

But I liked the new me. I named this new face Mr. Edward Hyde.

I went out the back door. I saw a horse and carriage on the side of the street.

I climbed in and yelled, "Take me to Soho!"

I spit out the window. I yelled at people on the street. Oh, how free I felt!

Before I knew it the driver called, "This is Soho, sir."

I jumped out and asked, "Do you want your money?"

Instead of paying the driver, I swatted his horse with my cane and yelled, "Yah! Away! Yah!"

The frightened horse galloped wildly down the street.

I laughed as I heard the driver yell, "Steady, boy! Steady!"

Soon it was morning. I hurried home. I snuck down to my lab and drank my magic formula. I was Dr. Jekyll again.

That morning, I opened my office late. I went shopping for clothes that would fit Mr. Hyde. For weeks, I was Mr. Hyde by night and Dr. Jekyll by day.

One night, Poole said to me, "Sir, Mr. Utterson is here to see you. He is waiting in the study."

"Dr. Jekyll, we've been friends for a long time," Mr. Utterson said. "I just wanted to see if anything is wrong."

"Nothing is wrong," I answered.

I thought I saw Poole hiding in the shadows listening to our conversation. I wondered what they knew.

"You have not been yourself lately," Mr. Utterson said. "This new friend of yours, Mr. Hyde, seems to be trouble. Why would you ever want to be friends with the likes of him?"

Oh! If only Mr. Utterson knew the truth! But I could not tell him.

"Mr. Utterson, thank you for your concern," I said. "You are a dear friend of mine. Mr. Hyde may be an interesting character, but I can assure you there is nothing to raise concern. Please excuse me. I have work to do in my lab."

I went down to the lab and quickly drank my magic formula.

This time I only drank half a glass, but I changed into Mr. Hyde even faster.

I snuck out the back door and tried to stay hidden in the shadows. But I saw Poole and Mr. Utterson watching me from the window.

I wandered up and down the streets of London. When the sun started to rise, I began to walk back to my house.

That was when all the trouble started. To be honest, I did not even see her. I slammed into a little child. I knocked her straight to the ground with a thud.

I did not care about the girl. I yelled, "Get out of my way, child!"

I kept walking. I did not look back. Then I felt a hand on my shoulder.

"Hey, you!" said a stern voice. "Did you knock that child over?"

The police officer chased Mr. Hyde down the street.

A police officer chased me.

"You there! Stop!" he yelled, as he grabbed his whistle. Tooot! Tooot!

I ran. Faster and faster and faster! If Mr. Hyde went to jail so would the good Dr. Jekyll. I did not look back. I ran straight to my house and into the lab. I slammed the door. I drank a glass of my magic formula. Nothing happened.

I drank another glass. Still nothing happened. Finally after four full glasses of the magic formula, I turned back into the good Dr. Jekyll.

I knew that Mr. Hyde could get Dr. Jekyll into trouble. So I did the only thing that I could. I put away Mr. Hyde's clothes.

I locked away my magic formula. It was for the best, because I was running out of the special powder and could not find any as strong.

I could not get Mr. Hyde out of my head. This went on for months.

But yesterday morning changed everything. I woke with a start. My knuckles were thick like knots, and my hands looked like claws. I glanced at the mirror. I knew whose face I would see -- Mr. Hyde's.

Imagine my terror! I had not swallowed any magic formula! Not one single drop! I ran out of my bedroom and down to my lab.

Dr. Jeckyll sees Mr. Hyde staring back at him in the mirror.

I drank one glass of my magic formula. Nothing happened. Finally! After drinking five glasses, I changed back into Dr. Jekyll.

I went back to work. An hour later, my head began to ache. I was seeing one of my older patients. "Doctor," he said. "Is something wrong?"

I could not speak. I dropped his medical chart. I ran out of the office and down towards my lab. Before I made it to my lab, I changed into Mr. Hyde.

I drank the last six glasses of my magic formula. I don't have any more. I have just a short time left. I am writing so everyone will know the horrible truth that I, Dr. Jekyll, am also Mr. Hyde.

I'm just waiting for Mr. Hyde to show his ugly face again. I am afraid to shut my eyes to sleep. He'll come if I do. He can come by himself now. He does not need any magic formula. He is much stronger than Dr. Jekyll.

I can hear Poole upstairs as I write this. I hear other people, too.

Closer! They are just outside my door.

They cannot meet Mr. Hyde. He could hurt them!

I can hear Poole calling to me. "Dr. Jekyll are you in there?"

"Go away!" I yell back. Perhaps if he reads this diary he'll understand.

What can I do? Bang! Bang! They are almost in!

Mr. Hyde is very near. He'll be here any minute...

Nessie is one of Scotland's oldest mysteries. Find out all about her in the next story, "The Loch Ness Monster."