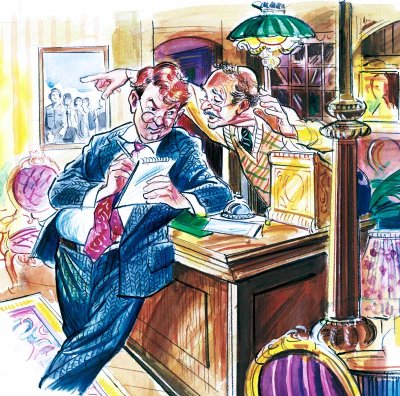 The Innkeeper tells O'Doud about the banshee in Limerick.

"Only silly children believe in such things," he would say. The only thing Aiken O'Doud believed was that he knew everything.

Aiken O'Doud was a reporter for a very important newspaper. The name of the newspaper was The Truth. Aiken O'Doud thought that this was the best name for a paper. "I do not believe in anything but the truth," he told his boss one day.

Aiken O'Doud's boss would send him to different places to write stories.

"I have a great story for you," his boss said one day. He told Aiken to go to the Irish village of Limerick. "I want you to write a story about the banshee," he said.

But the next day, Aiken O'Doud packed a bag and made sure that he had his notebook. He bought a train ticket for the village of Limerick.

Passengers seated around O'Doud moved away. O'Doud did not care. He grumbled to himself even louder.

O'Doud arrived in Limerick. He grumbled to himself as he walked to the Cloverleaf Inn.

O'Doud got right to work and began to ask questions about the banshee. The innkeeper told O'Doud how the banshee took the life of an old woman on the edge of the village.

"An old woman?" asked O'Doud. "How do you know that the banshee had anything to do with it?"

The innkeeper told O'Doud the villagers had heard screaming. "It was the howling of the banshee!" cried the innkeeper. "We all heard it just before the old woman fell."

"I don't believe such a thing," said O'Doud. "It must have been the wind."

"The wind indeed," said the innkeeper. He did not like O'Doud. "Go ask the other villagers. They will tell you what they heard."

"I'll do just that!" said O'Doud. O'Doud became angry that his boss sent him to this village. He thought the banshee story was silly.

Even though O'Doud did not believe in banshees, he wanted to learn more about the old woman. "Nobody can say that I did not do my job," said O'Doud. He went to visit the old woman's neighbors at the edge of the village.

Timmy O'Daley lived next door to the old woman. He was very excited to talk to O'Doud. "I have never really talked to a reporter before," Timmy said.

Timmy told O'Doud about the screaming he had heard the day the old woman disappeared. "It scared my cat right up the chimney, it did!" he said.

"Are you sure you didn't just hear the wind?" asked O'Doud.

"I never heard the wind sound like that before!" said Timmy.

Timmy went on to tell O'Doud about the legend of the banshee. "She's a fierce spirit, the banshee is," said Timmy. "Nobody sees her. But you know she is coming when you hear her scream. But her victim never hears the scream. So if everyone around you hears screaming and you don't, you're in trouble."

"She screams, you say," said O'Doud, making a note.

"When she screams, something bad is going to happen," said Timmy.

"Something bad. Yes, I see. Thank you for your time," said O'Doud. He wrote what Timmy said in his notebook, but he did not believe him.

"These people are crazy," thought O'Doud. "Next they're going to tell me that a leprechaun has left a pot of gold at the end of a rainbow!"

O'Doud left Timmy O'Daley. He walked back into the village. O'Doud knew he needed some more information for his newspaper story. He went to visit the local shopkeepers.

As O'Doud walked through the village, people stopped talking to each other. They tipped their hats or nodded politely.

O'Doud stopped to talk to Minnie O'Connell. Minnie ran the bakery. She was talking to Mrs. O'Malley.

"The banshee does not like those who don't believe," Mrs. O'Malley said.

"How do you know the banshee is real?" O'Doud asked.

"The banshee is real, you know," said Minnie. "You city folk think you've seen it all. But you've never seen or heard anything like the banshee."

O'Doud stopped writing for a moment. He looked up at Minnie.

"The likes of you better be careful," said Mrs. O'Malley.

O'Doud scribbled in his notebook and laughed to himself. He thought the women were trying to scare him. It did not work. O'Doud went back to the Cloverleaf Inn to sleep.

O'Doud woke up to a new day. He did not want to talk to more villagers. O'Doud thought the people in the village did not like him. He did not care. He thought that they were silly people with silly beliefs.

O'Doud got dressed and walked down the street. He was looking for a good place to eat breakfast. The villagers said hello. O'Doud thought he heard them say, "Good morning, O'Doubt!" He thought they were laughing.

"It must be my imagination," O'Doud said to himself.

O'Doud found a restaurant and asked the waiter for a cup of coffee.

"Did you hear the screaming last night?" the waiter asked, as he put a cup of hot coffee on the table.

O'Doud took a sip of the coffee. He did not hear any screaming last night.

"It kept me up," said the waiter. "All that strange screaming. It sounded just like the scream I heard right before the old woman disappeared."

The waiter bent down close to O'Doud and said, "Did you hear any wind last night, O'Doubt?"

O'Doud tried to eat his breakfast, but all the villagers stopped by to talk about the banshee.

O'Doud finished eating. Then he paid the waiter and left the restaurant.

O'Doud could not forget what the waiter had said. He thought about the screaming that people had heard in the night. He wondered why he had not heard all the noise.

As he walked near the village square, O'Doud looked at all the people. He saw Timmy O'Daley and Minnie O'Connell. He thought that they looked funny. He saw them looking around.

Everyone around O'Doud was covering their ears.

Then O'Doud saw that all the people had strange looks on their faces. He saw a few people cover their ears, as if they heard a loud sound.

"I think your wind is back again," shouted Timmy. Timmy covered his ears.

O'Doud did not hear anything. He looked around and around. He felt dizzy. He could not breathe.

Suddenly, O'Doud was struck down by the banshee!

The people of Limerick gathered around the man that they had all called "O'Doubt." The pages of his notebook blew in the wind.

Then a leprechaun peeked out from behind a stone and said, "Is O'Doubt gone then?"

Sometimes a mystery is the only thing that can save a ship Find out about a mysterious message in the next story, "The Second Captain."