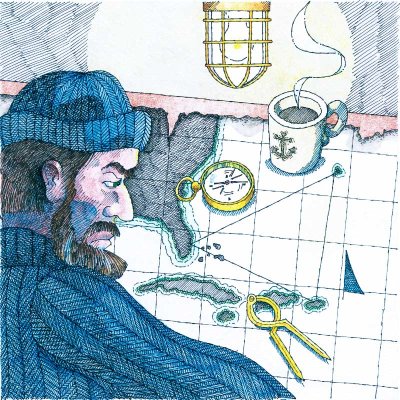 Although no people were on the drifting ship, it looked like people had recently been on the boat.

A long time ago, a new sailboat set sail from Florida. It had twenty-five sailors aboard. The crew was heading south towards the Bermuda islands.

During the voyage, dark clouds began to form over the ocean. One of the sailors used the radio to talk to the crew on a large navy ship.

"Do you have any information about this storm? Repeat: Do you have..." he said. The sailor's message stopped. The radio stopped working.

A young naval officer heard the sailor's message. He tried to use radar to find the sailors to help them. But the sailboat had completely disappeared.

Five years later, the same naval officer was on a search vessel. His radar found a sailboat drifting near Florida.

The young sailor boarded the sailboat. He did not find any people. But it looked like people had recently been on the boat. A warm cup of coffee was on a countertop near the stove. A board game was neatly set up on a table.

When the young officer got back to shore, he looked in the navy's sailing records. He found that this was the boat that had been missing for five years! The records showed that the twenty-five crewmen were never found.

Many sailors and airplane pilots try to stay far away from the Bermuda Triangle. They report that unusual, unexplained things happen in that area.

Their compasses, the tools that help navigate their direction, spin wildly in the Bermuda Triangle. Clocks and other equipment also display very jumbled numbers. Strange lightning storms are another reason sailors and pilots stay away from that part of the world.

There are also many reports of ships, planes, and all of their passengers just vanishing in the Bermuda Triangle. Some researchers say that over a hundred ships and planes have disappeared. One minute they are there, and the next minute they are gone without a trace.

Even stranger things have happen in the Bermuda Triangle. A missing ship has reappeared, but without any crew aboard. What could cause things like this to happen? What could explain these strange disappearances?

For years, scientists have been trying to figure out what is so different about the Bermuda Triangle. Why do so many odd things happen there?

One answer might be the weather in the area. Hurricanes are common there. It is possible that fast-moving storms surprise sailors and pilots.

Hurricanes are common in the Bermuda Triangle.

But other scientists say the mysteries cannot be explained by bad weather. An accident from a storm would leave some wreckage behind. Usually, rescuers do not find any broken pieces.

Other experts think there might be unusual magnetic energy in the Bermuda Triangle. The magnetic energy draws objects towards it. It makes compasses and clocks break or malfunction. But why does this strange energy cause some vessels to disappear and not others?

Most likely, the pilots and sailors of these crafts are to blame. People who sail for fun sometimes make mistakes or take risks that could cause an accident. Many pilots of small planes are new to flying. It takes a lot of skill to fly a small plane or sail a yacht in bad weather.

There's a legendary creature that stalks the peaks of Nepal. Learn all about him in the next story, "Yeti."