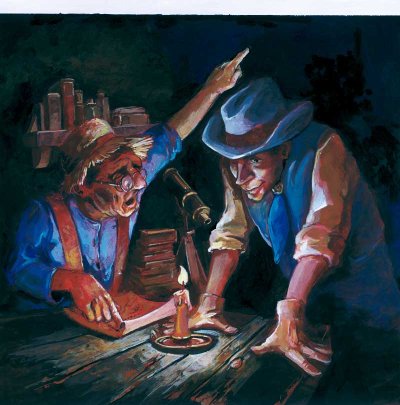 The man told Orange he could catch the night coach into town.

Orange kicked the dusty, dry dirt with the toe of his leather boot. He cupped his hand to his mouth. "Gypsy," he called to his horse. "Gypsy, come back here!" Orange knew Gypsy was long gone.

"That horse! She sure gets spooked a lot," the cowboy said. Orange took off his brown ten-gallon hat. The sun was still hot, even though it had begun its descent behind the horizon. Night would soon fall upon the desert.

Orange had been riding through the desert to see his brother, Pete. Then all of a sudden, something startled Gypsy.

"Musta been a rattler," Orange thought. He had not seen one, though. Whatever it was, it sure scared Gypsy. She reared up and flung Orange from her back. Now Orange was stranded and did not know what to do next.

He surveyed the landscape. He saw a whole lot of sand.

Much to his surprise, Orange spotted a tiny cabin. A small trail of smoke rose from the chimney. Orange could tell the cabin was quite a ways away, but the evening air was growing brisk. He knew that temperatures in the desert dropped way down at night, so he started walking.

It was plenty dark when Orange finally made it to the cabin. But he could still see the dim light inside. He rapped at the door.

An old man, stout and balding, opened the door a crack. "Can I help you?" he asked cautiously.

"Why, yes sir. I hope so, sir," Orange said. He removed his hat politely. "Seems my horse got spooked and left me stranded here. I was hopin' you might be kind enough to give me shelter for the night."

"Come in," the man said. "I suppose you're hungry." He walked over to his kitchen and pulled some cans from a small pantry. "You're welcome to these," he offered. Then he poured Orange a cup of coffee.

While enjoying a supper of beans and stew, Orange looked around the cabin. It was filled with books and papers. A telescope rested on a nearby table.

"It's not too late to catch the night coach into town," the man offered, while Orange ate. "You could buy a new horse in the morning."

"You just need to walk out to Red Rock Hollow," the old man showed Orange on a map.

"That's where there's an opening in the rocks big enough for a coach to pass. It's the most direct route through the valley."

Orange thanked the old man for the suggestion. "And thank you for this fine meal, too," he added. Then Orange grabbed his hat and set off.

Orange walked alongside rock formations, which served as his guide. He immediately noticed that the temperature had fallen.

"It's downright cold out here," Orange declared, as he made his way towards Red Rock Hollow. Something seemed eerie.

"Maybe Gypsy had the right idea," he thought, shivering.

Orange rounded a bend and saw Red Rock Hollow before him. Suddenly, he noticed two tiny, dim lights shining through the hollow. The lights were steadily growing bigger and brighter.

Excitedly, Orange realized it must be the night coach. He jumped out into its path and shouted, waving his hands. Sure enough, the coach stopped.

Now, Orange had seen a lot of coaches in his day, but he had never seen one like this! It was black from top to bottom. A jet black horse wearing a giant black plume pulled it. The driver, who had not said a word, was draped in a heavy black cloak.

"Well, this is mighty strange," Orange thought to himself. But he went ahead and hopped inside anyway.

Orange did not feel comfortable sitting inside the eerie coach. But before long, the black horse was galloping at full speed. Its hooves thundered across the desert floor.

"I wonder why the hurry," Orange thought.

Orange decided he better say something to the driver. He leaned right out the window.

"Evenin' my good man," he shouted. "I thank you kindly for the ride. How long will it take us to get to town?"

He waited for the reply, but the driver said nothing.

"It shouldn't take too long at this pace," Orange continued. There was a big lump in his throat. He felt uneasy. Something was definitely not right. The coach sped on into the night.

"Perhaps you could just let me off right here," Orange called to the driver. "I believe I may be on the wrong coach."

When the driver turned around, Orange was struck with fear.

He was relieved when the driver finally turned around. But relief soon turned to horror. The driver had no face!

Orange's eyes grew wide. "Now I know I'm on the wrong coach!" he said. Out of sheer terror, he closed his eyes and jumped.

When Orange woke up, he discovered he was in a bed. His brother, Pete, was there, as well as Pete's wife and a doctor.

"Orange!" Pete said. "We're gonna have to change your name. Your hair done turned pure white! Like you seen a ghost or something."

"H-h-how did I get here?" Orange stammered. He was still in a bit of shock from his ride.

"Why, the night coachman, of course," Pete said matter-of-factly.

Orange began to shudder. It was all coming back to him now. He could still see the black coach and horses. He did not even want to think about the driver who did not have a face.

Pete told Orange that they'd have to change his name now that his hair had turned white.

"Yes, sir," Pete continued. "Said he saw ya lying in the desert, flat on your face. He stopped to see if you was alright and brung you on here. But don't you worry none," Pete patted Orange's shoulder. "We've arranged to have another coach take you on home."

"No! No coaches!" Orange blurted out. "A horse'll suit me fine. Yes, just find me a horse, would ya, Pete?"

Orange thought for a moment. "And make sure it's not black!"

Read about the girl who came from the sea in the next story, "The Selkie Child."