The Mystery on the Sargasso 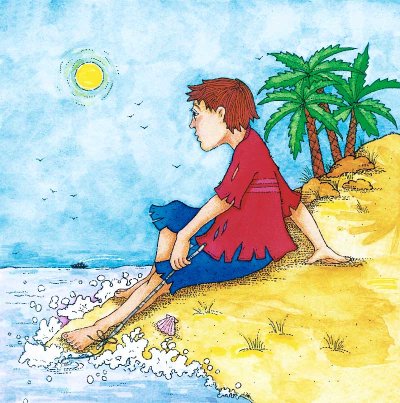 John had been stranded on a tiny island for seven days and seven nights.

John Fields sat on the sand. He looked out over the endless Sargasso Sea. He saw nothing but blue water. He had been stranded on this tiny island for an entire week. He had seen seven sunrises and seven sunsets.

"Good morning, sun!" John would say each morning. At night, he talked to the moon and tried to count the stars.

While he sat on the island, John thought about the storm that had brought him there. He remembered the way his tiny sailboat was tossed about on the waves. He remembered falling into the water. Finally, he remembered waking up in the very spot where he sat now.

John kept busy by fishing for food. He collected coconuts that fell from the trees. The husks of the coconuts were hard to open. But the sweet milk inside was a welcome reward.

Most days, though, John sat and looked at the water. One day, John saw a dot on the water. The dot was a ship! Even though the ship was far away, John could see that it was getting closer. He jumped up and down. He yelled and waved his arms. He would be saved!

As the ship sailed near John's tiny island, he yelled even louder. John ran out into the water. He laughed and waved at the boat.

Soon the ship was near the shore. A crew member rowed a small lifeboat over to John's island.

"I'm happy to see you," John said to the man in the boat. He climbed in. John was so excited, he had trouble sitting still.

The man rowed John back to the ship.

Aboard the ship, the captain and crew welcomed John. "You are a very lucky man," said the captain. He shook John's hand.

"Thank you," John said over and over. He knew that he was very lucky. As he looked around the ship, though, John noticed that things were strange. The captain and crew were wearing unusual uniforms. They were Americans, like John, but he felt that they were very different.

"Welcome aboard The Lily Belle," said a crew member, as he led John into a ballroom. "You must be very hungry," said the man. John was very hungry. He was tired of fish and coconuts.

John walked through the ballroom. He saw many people having fun. But, again, something about these people made John feel strange.

The crew member showed John a table covered with food. "Enjoy! Eat as much as you like," he said.

The crew of the Lily Belle showed John to the ballroom.

John stood at the table, filling a plate with delicious treats. He could not believe how hungry he was! He did not bother to sit down at one of the tables. He bit into a piece of chicken. He licked his fingers. He looked at all the people in the room.

Suddenly, he realized why these people seemed strange to him. Everyone looked as if they were dressed in a costume! They looked like they were having an old-fashioned costume party. He thought their outfits looked like pictures he had seen from the 1930's. "How fun!" he said to himself.

Soon he was approached by a stranger. She introduced herself as Addie Stewart. "Where did you get that costume?" she asked.

She laughed, but it was a very kind laugh. John thought he must look out of place.

"Your costume is wonderful," said John.

"Costume?" she asked him. "I'm not wearing a costume. This is my favorite dress." Addie stopped smiling.

John realized that he had said something wrong.

John did not know what to say to Addie. He asked her about the news.

"Have you seen the new bridge?" she asked.

"Which bridge is that?" he asked.

"The Golden Gate Bridge!" she laughed. "It's all anyone talks about."

Addie stopped smiling again. "Years ago? Very funny." She thought John was making fun of her.

John felt bad. He did not know what to say. He realized that he was very thirsty, so he excused himself. He went to get a drink.

John got a glass of soda. He looked at a newspaper. The newspaper's date said June 2, 1937! John picked up the paper and read the headline, "Amelia Earhart Ready to Fly Around the World!"

"You guys got props and everything," John said to a man next to him.

Just then, John heard the bartender's radio. He heard the man on the radio talk about President Franklin Roosevelt. John could not believe his ears! "What day is it? What year?" John asked the stranger.

John ran out onto the ship's deck. "What day is it? I mean, what year is it?" John asked the people on the deck. They laughed. They thought John was just being silly.

John knew that something was wrong. "Can you please tell me who the President of the United States is?" he asked a man and woman.

The couple laughed, but they answered his question. "Roosevelt is the president," said the man. The woman giggled at John.

John knew that he had to leave the ship. Something was very odd on this boat. He felt sick.

John looked around and saw the small lifeboats along the side of the ship.

John launched a lifeboat and rowed away. He rowed as fast as he could.

Days later, John was picked up by an American fishing boat. He told the fishermen about the strange ship and the party.

The fishermen looked at each other. John began to describe the ship and the crew. Then John added, "The boat's name was The Lily Belle."

The fishermen were silent. Finally, one of the fishermen said, "The boat you described is a cruise ship. It disappeared in the Bermuda Triangle almost seventy years ago!"