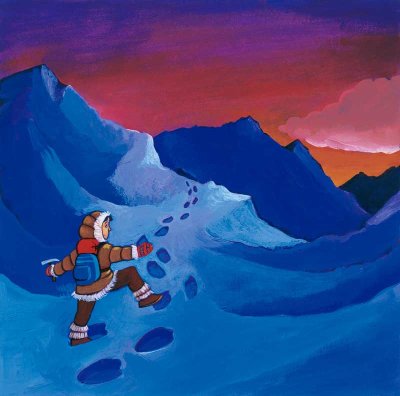 Ang followed the footprints in the snow.

A Sherpa boy named Ang Chiki lived near the mountains of Nepal. His uncle led people on hikes through the icy Himalaya Mountains. Ang was on his first expedition.

Ang slipped and rolled down the snowy mountainside. He was not hurt, but the group was now far ahead of him.

Ang found the group's tracks in the snow. He followed them, hoping to catch up before nightfall.

Ahead of him, Ang saw fresh tracks that crossed the trail. These footprints were large and wide.

Ang put his boot in one. The tracks were deep. They held his feet well. Ang stretched his legs to step in them, one by one.

The footprints led him up the mountain towards the peak. With every long step, Ang was getting closer to the group.

But these huge tracks ended before the peak. They stopped at the opening of an icy cave. It was dark inside.

Ang looked into the cave. It smelled awful!

From inside the cave, something grunted and growled. Ang stepped back in fright. His face became as pale and cold as the icy cliffs around him. Ang turned around and ran.

The wild creatures of Nepal are called "yeti," which means "snowman."

The people of Nepal tell stories about wild creatures in the mountains. The Sherpa call them Yeti, which means "snowman." Some people know the Yeti as the "Abominable Snowman."

Some people have seen a Yeti walk standing up, like a person would. Some say they run on four legs like animals do.

They are very fast, even on ice. No one has ever seen a Yeti standing still. Their light-colored hair helps them hide in the snowy mountains.

Many hikers say they have seen these savage snowmen in the mountains of Nepal, Tibet, China, and Russia. They find Yeti tracks in the snow.

One mountain climber took a picture of a footprint in 1951. The track was large. The creature that made it was heavy. It had big toes like a person. It walked through the snow with bare feet.

The photograph of the yeti footprint suggests that the creatures are large and heavy.

In 1986, another mountain climber claimed to see a Yeti. He came within thirty feet of the creature.

Scientists have searched caves and rocks in the Himalaya Mountains. They found clumps of rough white hairs. They found the bones of a hand trapped in ice for hundreds of years. Was it a prehistoric human hand, or a modern Yeti hand? Tests on the bones did not answer these questions.

A Yeti has never been caught on film. The Sherpa people say the Yeti are too swift. No one will ever catch them, not even with a camera.

One Sherpa guide has said the Yeti are not real. They are only in the scary stories people tell their children.

The Yeti are said to live high in the mountains. Tracks are found in places people rarely go.

Some researchers compare stories of the Yeti with stories about Bigfoot. But Yeti are smaller, and they have white hair. The researchers say the Yeti could be the cold-weather cousin of Bigfoot.

Scientists study about new places all the time. In jungles and oceans where people never go, living species of bugs, birds, plants, and fish are just waiting to be found.

What if scientists studied the rough, icy mountaintops in Nepal? What would they discover?

Find out the darker side of having your wishes granted in the next story, "The Monkey's Paw."