Why do people avoid stepping on cracks? 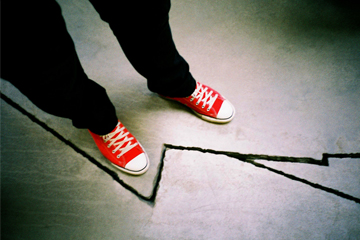 You'd be surprised at how many adults do their best to avoid stepping on a crack.
Tracy Packer Photography/Thinkstock

A little girl skips down a sidewalk, holding hands with her best friend. Together, they sing while strategically placing their footfalls. "Step on a crack and break your mother's back," goes the tune, a harmless little rhyme whose dark origin seems ill-matched with the bright game it has become.

Like these children, many people avoid stepping on cracks, whether they appear in soil or sidewalks. There's no definitive source of the first instance of this avoidance, but there is evidence that the practice dates to some of the earliest folk beliefs shared by early Europeans and Americans. The basic idea was that cracks were not something to trifle with because danger lurked in these empty spaces. Cracks in sidewalks, floors and soil, as well as in walls, signaled gaps in the boundaries between the earthly realm and the metaphysical realm. Interact with these chasms, no matter how narrow, and it could bring misfortune to you or your family.

One perceived consequence of crack-stepping that persists to this day was damage to your family's health -- thus, the "break your mother's back" rhyme and its more rarely heard cousin, "step on a line, break your father's spine." Although some took the phrase literally and avoided cracks to preserve their mothers' mobility, others were left with a sense of "waiting for the other shoe to fall." This general unease was attributed to a vague threat of ill fortune brought on by negative magic, which usually includes a tit-for-tat scenario. In this case, offenders might cause a break by stepping on a break.

A poll of 3,000 respondents in Great Britain found that one in 20 wouldn't step on cracks in pavement, even though they didn't really think they'd face real-life consequences if they did. Because of long-held superstitious beliefs -- some we don't even fully understand the meanings of -- we think four-leaf clovers are lucky or black cats are bad luck, and that stepping on a crack causes harm [source: Daily Mail].