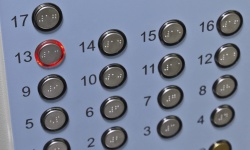 Most high-rises skip from the 12th to the 14th floor.
Denis Belyaevskiy/iStock/Thinkstock

Superstitions about numbers may seem like they're little more than tall tales thought up by desperate gamblers, but these numerical superstitions impact virtually every stage of life and have moved well beyond the world of gambling. Whether inspired by biblical stories or the legends of ancient people, these so-called lucky or unlucky properties assigned to numbers have real meaning to many people. Based on little more than a story, where the origin is often unknown, people will alter travel plans, delay purchases or spend their life savings on lottery tickets. Wonder where these numbers earned their reputations? Read on to learn about some of the most popular superstitions in the world of numbers.

The superstition associated with the number 13 is so common that it even has its very own name, albeit one you probably can't pronounce: triskaidekaphobia. People are so afraid of this seemingly innocent number that the United States economy loses almost a billion dollars in business every time Friday the 13th rolls around. It also explains why more than 80 percent of high-rises don't have a 13th floor: Architects skip straight from 12 to 14 to appease suspicious folks. So how did 13 get its spooky rep? It might date back to a Norse myth: When a 13th guest showed up to a party attended by 12 gods, one of the gods ended up dead, and tremendous destruction followed. The suspicion of the number 13 could also be blamed on Judas, who was the 13th guest to make it to the Last Supper, and everyone knows how well that turned out.

When it comes to numbers, some superstitious folks believe that even numbers are unlucky , while being odd lends a number a bit of luck, making it a smart pick for gamblers. While it's unclear exactly what the rationale is behind this tale, it could be that even numbers are unlucky simply because they are divisible, which lessens or reduces their power. Odd numbers can't be reduced in this manner, so they're stronger and more powerful than even figures [source: Webster]. This superstition even extends to money: Some folks believe it's best to tear the corner off a two-dollar bill, giving it an odd, three-sided edge, just in case.

Just as 13 is considered one of the unluckiest of all numbers, 12 is considered the rare lucky number that happens to also be even. The origins of this superstition are sketchy, but some sources suggest that 12 gained its lucky rep simply because it's so nicely divisible. For such a small number, it can be neatly divided into halves, quarters or thirds. Others believe that 12 wins positive vibes simply because of its close proximity to the supremely unlucky 13. Of course, there are those that argue that 13 is unlucky simply because it's so indivisible, particularly when placed next to the neatly divided 12. This argument quickly turns into a chicken-or-egg debate, but it doesn't change the fact that the number 12 comes with an air of luck [source: Patrick and Thompson].

The number three is considered lucky for a number of reasons. First, there's the fact that a man and a woman — a unit of two — can become a unit of three with the creation of a child, giving the number three a bit of magic all around the world. The figure is also closely associated with the Holy Trinity, which can be found in various forms in many world religions. In Christianity, there's the Father, Son and Holy Spirit; Hinduism also has its own Holy Trinity of sorts; Islam has its three main holy sites; and some pagan traditions celebrate the trinity of land, sea and air that make up the Earth. This magic associated with the number three has given rise to sayings like "third time lucky" and "third time's a charm," both of which suggest that two failures are sure to be followed by success on the third attempt.

Of course, three isn't all sunshine and rainbows. Some associate the number with negative events, such as the superstition that bad things happen in threes. For example, many people believe that things break in groups of three, so if you break something around the house, it's best to break two more minor things soon after to avoid inadvertently breaking something more expensive down the road. This idea has been extended to the idea that celebrities die in threes or that lighting three cigarettes with a single match will lead to death. One explanation for this phenomenon is that perhaps humans have created the rule of three as a way to put an artificial ending on a bad experience; if you know that you'll only break three things or that only three celebrities will die in a row, you may be able to better control negative events — at least in your mind.

The number nine is particularly lucky in most of the world because it's three times the magical number of three, which gains its good vibes from its association with the Holy Trinity. That's why someone having a great day is said to be on cloud nine, while someone who's looking extra dapper is dressed to the nines. Even the cat-o'-nine-tails, a painful whip used to punish disobedient sailors, benefited from the power of nine. When used in punishment, many believed that the nine tails of the device would work their magic on the offender, transforming him into a worthy seaman [source: Webster].

Despite the luck generally associated with this number, the Japanese view it with distaste, due to the fact that their word for nine sounds an awful lot like their term for torture or suffering.

Forget individual numbers — the very act of counting itself comes with a series of positive and negative superstitions. One folk remedy suggests that counting the number of warts on your body and revealing the number to a stranger will cause the warts to go away. Of course, you should never count money, your children or your possessions, as this can make them go away as well. The same is true for livestock — like counting chickens before they hatch — as well as fish and gambling winnings. Some superstitious types claim that weighing babies at birth also brings bad luck, as does counting the stones in ancient monuments.