Why is it bad luck to light three cigarettes with one match? 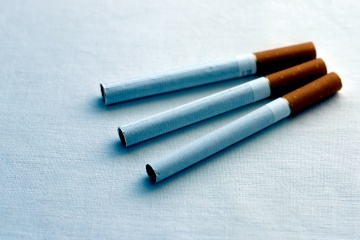 Maybe you should carry your own lighter around, because we'd hate for the "three cigarettes and a match" myth to be true.
Tomislav Stajduhar/Thinkstock

Are you a superstitious person? Seems there's a superstition about everything. Step on a crack, break your mother's back. Don't walk under a ladder. Don't let a black cat cross your path. If you spill salt, throw it over your shoulder to avoid bad luck. Friday the 13th is a bad-luck day. Horseshoes are lucky. Knock on wood for good fortune. Honestly, it's a wonder we get anything done!

Even though many people no longer smoke cigarettes, superstitions around smoking still abound. Here are just a few:

Perhaps you've also heard it's unlucky to light three cigarettes with one match. It might not seem unlucky. In fact, it seems downright practical. Why waste three matches when you can get the job done with one? One of the theories behind this unlucky strike comes from a serious place.

The common phrase for lighting three cigarettes with one match is "three on a match." One of its origin theories dates back to World War I. If three soldiers decided to smoke cigarettes together after dark and lit their cigs from the same match, superstition held that at least one of them would end up dead. Here's why. The strike of the match would alert an enemy sniper of the soldiers' presence. As the match burned to light the second cigarette, the sniper would have time to aim his rifle. Finally, as the third cigarette lit up, the sniper could shoot the third smoker.

Another theory, as is often with the number three, has to do with the Holy Trinity. Some believe using the trinity symbol casually, like lighting cigarettes in threes, is disrespecting holy law. Doing so can make you powerless in the face of the devil or evil. That one match, the notion goes, could light the fires of hell.

A final, and a bit more sinister, theory involves one Ivar Kreuger, also known as The Match King. Kreuger, a shrewd (and some say deceitful) businessman, bought many matchmaking factories in the early 1920s and consolidated them. By securing a monopoly on match production, he became outrageously rich and powerful. Many believe Kreuger fabricated the entire superstition that using one match to light three cigarettes was bad luck. Why? To sell more matches.