Why are people afraid to open an umbrella indoors? 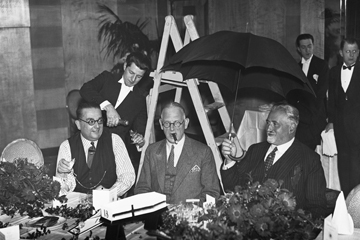 Members of an eccentric club celebrate Friday the 13th by going out to lunch and challenging popular superstitions.
© Hulton-Deutsch Collection/CORBIS

Although you've spent several hours strolling through the National Gallery in London, you're not ready for the inspiration to end. You make your way to the gift shop, tucked near the main exit, and rifle through prints, picture books and postcards. As you spin the postcard turnstile display near the windows, you realize it's started to rain. It's not really a surprise (it is London in January, after all), but you're still taken aback. You left your umbrella at home.

Just then, you spy a large canister sporting several different umbrella styles, including some that appear to be a re-creation of your favorite painting by Claude Monet, "Woman with a Parasol." You rush over and deploy one of the umbrellas just to be sure. The crowded shop goes quiet, save for some offended gasps and the clerk insisting you shouldn't open an umbrella indoors. But why?

The modern superstition about opening an umbrella indoors most likely stems from the 18th century, when umbrellas were still a relatively new invention. Although the design was similar to today's umbrellas, these early iterations were unwieldy and difficult to handle. The frame of the umbrella relied on sharp metal spokes that would spring open at the command of a stiff spring mechanism. There was no in-between when opening umbrellas: They were either tightly closed or sprung into action, often with such force that they could put out an eye. Anyone standing nearby was in danger of a smack by umbrella tines. And that fragile vase that had been in the family for generations? Easily toppled to the floor by an ill-timed umbrella deployment. Because opening an umbrella indoors often resulted in negative consequences, this encouraged a superstition first whispered by ancient Egyptians.

Egyptian nobility were protected from the sun (not the rain) with umbrellas made of papyrus and peacock feathers. Because the umbrellas were designed to mimic the goddess who formed the sky, their shade was sacred. Anyone who allowed the shade of a royal umbrella to fall upon them had to be royalty. Otherwise, they were considered a bearer of bad luck.

Another school of thought contends that opening an umbrella indoors will upset a home's good spirits. These unseen guardians, who are otherwise protective, will cause misfortune to rain upon your family if an umbrella is opened in their presence. So, whatever theory you subscribe to, it's probably best to leave the umbrella for the outdoors.

Is it rude to ignore someone's texts?
How Code Switching Works
Halloween Masks