Why are wishbones supposed to be lucky? 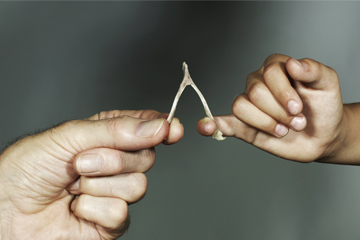 Wishbones may be the origin of the term "getting your lucky break." Who knew?
Brand New Images/Getty Images

One of the more iconic images of the holidays is that of two family members (usually kids) fighting over a wishbone. Each struggles to crack the bone and get the bigger piece, ensuring good luck and that his or her wish will be granted. What's behind this rather odd piece of folklore?

The furcula, or "wishbone," of a turkey, duck or chicken is the fusion of the bird's clavicles right above the sternum. Although today we mostly play the wishbone game with turkey bones during the holidays, the origins of wishbones as lucky charms go all the way back to ancient times. Around 700 B.C.E., the Etruscans believed birds were oracles and could tell the future. Whenever the Etruscans slaughtered a chicken, they would leave the furcula in the sun to dry out, preserving it in hopes of gaining some its divining powers. Villagers would then pick up the furcula and gently stroke it while making a wish — giving it its more common name, the wishbone.

Legend has it that the Romans then picked up on this superstition. However, chickens were scarce, and therefore so were the wishbones. People had to resort to cracking the bones in half so there were enough to go around. Later, the Romans passed the wishbone-cracking tradition to the British, who then carried it over with them to Plymouth Rock. As this new land was abundant with wild turkeys, people began using turkey wishbones for luck.

But what are the rules around cracking a wishbone? How do you make a wish on it? Typically you dry the wishbone for a few days until it's brittle. Then, two people hook their pinkie fingers around each end, make a wish and pull. Whoever ends up with the bigger piece will have their wish come true. More complicated versions of this include a British version in the 17th century in which someone would balance the wishbone on their nose, make a wish and then shake it off. Then it would be pulled apart. Or, taking it further, then the winner would put a broken piece of the wishbone in each fist and let the other person choose a fist. If the other person chose the longer piece, they would get their wish instead. Complicated, we know [source: Meikle].

Some people wear wishbone jewelry or carry small ones as good luck charms, just like a four-leaf clover or a rabbit's foot. It seems, though, that the unbroken wishbone is only the promise of good luck. It must be broken for your wish to come true. Which, by the way, may be the origin of the term "getting your lucky break."