Why is walking under a ladder supposed to be unlucky? 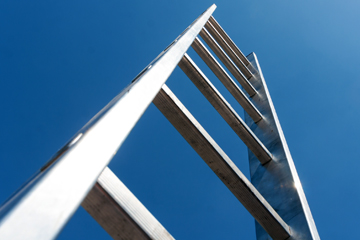 If a ladder is nearby chances are someone's up to some heavy-duty work. You better watch out!
Nomadsoul1/Thinkstock

If you're superstitious, walking through the streets can feel like navigating a field of bad luck landmines. Don't let a black cat cross your path. Step on a crack, break your mother's back. And never walk under a ladder! With constant construction going on in many big cities today, the ladder one is a biggie. Why is walking under a ladder so unlucky for the unfortunate souls who find themselves accidentally underneath one, and is there any way to undo the curse?

First, let's get the practical reasons out of the way. Most people don't want to walk under a ladder because it's just unsafe. If a ladder is up, chances are someone's standing on it, working, and you don't want to take the chance of something falling on your head. Nor do you want to risk jostling the ladder and knocking someone down.

Of course, many other theories exist about the unluckiness of walking under a ladder. One explanation regarding ladders and bad luck has its roots in religion. Many Christians believe in the Holy Trinity -- the Father, the Son, and the Holy Ghost. This belief made the number three sacred in early times, and along with it, the triangle. A ladder leaning up against a wall forms the shape of a triangle, and walking through it would be seen as "breaking" the Trinity, a crime seen as blasphemous as well as potentially attracting the devil [source: Pappas].

Others believe that a ladder against a wall resembles a gallows. Ladders used to be propped up to allow the person being hanged to climb high enough to get to the rope. Definitely not very lucky. Yet a third theory involves the Egyptian belief that if you walk under a ladder, you might accidentally see a god climbing up or down [source: Webster].

If you do walk under a ladder, can you reverse your ill fortune? Richard Webster, author of the book "The Encyclopedia of Superstitions," lists five remedies you can try:

Another talked-about remedy is to spit on your shoe -- but don't look at your shoe until the spit has dried. Or, spit three times between the rungs of the ladder. It seems easier just to avoid the ladder altogether.