Why do people think it's bad luck not to blow out all the birthday candles in one breath? 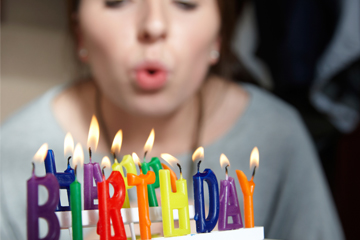 All eyes are on you, so don't blow the blowing.
tirc83/Thinkstock

The guests at your party gather around the table, singing a familiar refrain. The lights dim and a glow warms your smiling face as the candles atop your cake are lit, one by one. You close your eyes, make a wish and take a deep breath. Everything is riding on this solitary exhale. If you can't blow out all your candles in one fell swoop, the wish you make won't come true.

Although Egyptians didn't celebrate birthdays like we do today, they did recognize the birthdays of pharaohs. The earliest birthday party was recorded around 3000 B.C.E. and most likely marked the pharaoh's coronation, the moment he was "birthed" as a god [source: Scolnic].

It was the Greeks, however, who began to shape our modern birthday customs. They made round, moon-shaped cakes and offered them to the lunar goddess Artemis, who pulled double duty as the goddess of the hunt. By some accounts, the Greeks were the first to place lit candles on cake as a way to symbolize the glowing moon. Like many cultures, the Greeks believed candles were vital to their spiritual beliefs. It's possible they thought the lit candles could ward off evil spirits. When blown out, the candles could carry their prayers to the gods.

By the 18th century, there were widespread accounts of Germans celebrating birthdays with cake and candles. The German festival Kinderfest was a birthday celebration for children. It featured cakes with a single candle each. In 1746, however, there is record of a birthday cake decorated with a candle for each year of life. A count named Ludwig Von Zinzindorf threw a birthday bash with a large cake outfitted with candles to mark his age.

What Is Einstein's 'God Letter'?
This One Guy Is Responsible for What We Think a Pirate Sounds Like
Sex Abuse in Catholic Church Blamed on Money, Power Dynamics