Why are people superstitious about double-yolked eggs? 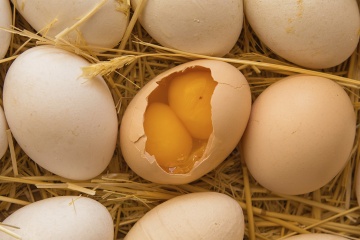 Double-yolked eggs can be a blessing or a curse. It all depends on your perspective, or your culture even.
MandD/Thinkstock

There's about a one in one thousand chance that the next egg you crack open will be double-yolked. As is the case with many uncommon occurrences in nature, people have attached many superstitions to double-yolked eggs. They're a pretty obvious reference to fertility, so most of these superstitions have to do with reproduction and good fortune. The most common is that you or someone you know will soon become pregnant (maybe with twins) if you happen upon a double-yolker. In the Wiccan tradition, they're known as a sign of general good fortune. If you're interested in ancient Norse beliefs, you might feel a sense of doom if you get a double-yolked egg -- it means that someone in your family is about to meet their maker.

So what causes a double-yolked egg? They happen when the chicken ovulates twice in quick succession. The yolk (known as an oocyte at this point), is released into the oviduct (the chicken's fallopian tube) before the previous yolk has had a chance to clear out of the way. So a single shell then forms around the two yolks. Double-yolks usually happen in younger hens with more immature reproductive systems whose timing hasn't quite been perfected. It can also be a hereditary trait in heavier hen breeds like the Buff Orpington. Triple- and quadruple-yolked eggs exist too, although they're even rarer, and the world yolk record is nine. In 2011, a British woman cracked open an astonishing 29 double-yolkers from one package.

Double-yolked eggs, although unusual, are perfectly safe to eat. They still make amazing scrambled eggs and omelets and can be used just like a normal egg in most recipes. But because the white-to-yolk ratio is off and they don't quite count as two eggs, you might have to alter certain baking recipes if you want them to come out perfectly.

For a long time, double-yolked eggs have been considered the black sheep, if you will, of the egg world. When eggs are being processed, they go through a step called candling, during which they're examined under a light and checked for defects. Double-yolkers usually get pulled out at that point and not sold along with the normal eggs. But they've been enjoying a little bump in popularity recently, perhaps because people are becoming a bit less averse to cholesterol. (The double yolk is an extra shot of protein, after all.) Or maybe it goes along with the general trend of interest in products from smaller farms. Sauder's Eggs, a farm in Pennsylvania, packages the doubles separately and sells them as "Double-Yolkers."

So, you can rest easy now if you've been under the impression that double-yolked eggs are somehow defective and to be avoided. And you probably won't have to worry about becoming pregnant or a family member dying if you happen to crack one open -- just fire up an omelet and enjoy!

Author's Note: I had to laugh when I read the article about the woman who got all those double-yolked eggs. Recently, I got pretty excited when a double-yolker was the first one I cracked open from a package of three dozen local, organic eggs. But that delight turned to uneasiness as I gradually discovered that they were all double-yolked. What's that all about? Never bought from that farmer again, but if I'd have known the odds I would've tried to get on the news!