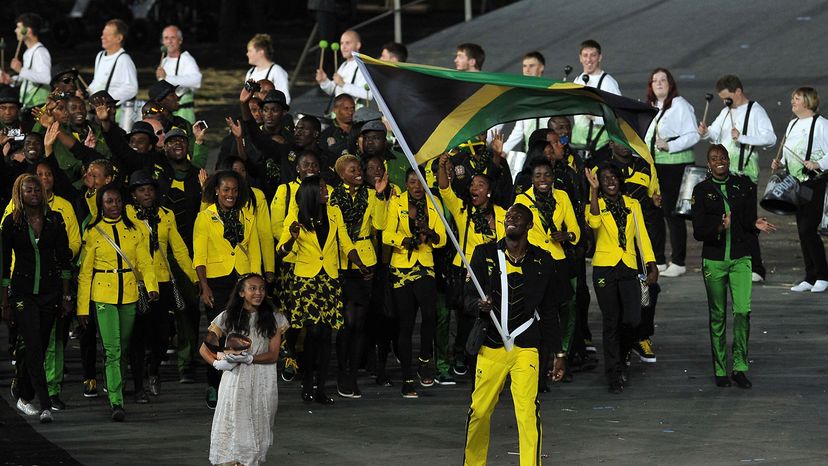 Usain Bolt of Jamaica carries his country's flag during the opening ceremony of the London 2012 Olympic Games. Bolt is the current world record holder in the 100m and 200m races and considered to be "the fastest man alive." Laurence Griffiths/Getty Images

For an island of just 2.8 million people living on about 4,244 square miles (10,991 square kilometers), Jamaica is surprisingly well-known around the globe. It's sometimes called "The biggest little country in the world." Some people know Jamaica from having spent a holiday on its renowned white-sand beaches. Others have been captivated by reggae music, popularized by Jamaican artists like Marley and Peter Tosh. Or they've seen Jamaican Olympic gold medalist Usain Bolt, the "world's fastest man" on TV, blazing through various track events. They may have also seen news coverage pictures of crime and violence. Each of these is a part of Jamaica.

The poverty rate is also high, 23 percent in 2020 while the 2021 unemployment rate was 9 percent [sources: UNAIDS, Macrotrends]. The combination of poverty and crime has fueled widespread emigration. In fact, an astounding 85 percent of college-educated Jamaicans have emigrated [source: Trading Economics]. There are probably as many Jamaicans living outside of Jamaica as there are on the island. And this has helped spread Jamaican culture abroad.

Despite these conflicting images, Jamaicans always go home to visit -- and tourists come in droves. All told, Jamaica is one of the most naturally beautiful places you'll ever see. It will get under your skin and you can't let go of it. That said, Jamaica is a study in contrasts and always will be.

The island's history may help explain why: Christopher Columbus "discovered" Jamaica in 1494. The island was originally populated by the Taino Indians, who were wiped out when Spain colonized it in the 1500s. In 1655, England captured the island and imported large numbers of African slaves to work the sugar plantations. After slavery was abolished, England imported Chinese and Indian indentured servants to the island. Jamaica won independence from England in 1962, but the racial melting pot that came from past colonization created an entirely new culture -- and a new set of cultural traditions.

We'll start by introducing you to some of these traditions firsthand, courtesy of the writer, who was born in Jamaica. Let's start with the holidays.

Unlike some Americans, Jamaicans like their holidays lengthy. Christmas actually lasts for two days -- in fact, many companies close for the entire week between Christmas and New Year's Day.

Christmas Day may start off with a 6 a.m. church service. The other popular way to greet the day is with a visit to Grand Market. This is a street fair held all over the island during the holiday season, with vendors selling toys, sweets and crafts, plus entertainment. Parents often take their children to Grand Market on Christmas Day to pick out some toys, while other kids will lie in bed awaiting the arrival of Santa Claus.

Christmas dinner will likely consist of roast chicken, rice and gungo peas (pigeon peas), with sorrel to drink. Sorrel is a plant, not unlike the rooibos (red tea) herb, which is steeped hot, then cooled and mixed with ginger, sugar and white rum. Its bright red color makes it a great holiday drink. Dessert usually features a Christmas cake or pudding, very similar to the type made in England, but with a lot more alcohol.

Another tradition is the Junkunoo parade, which is found in many Caribbean islands and has its roots in slavery. Men dressed in costumes representing the devil, a cow and even a pregnant woman parade the streets in small groups accompanied by drums and flutes, much to the amusement of the onlookers [source: Tortello]. On Boxing Day, the day after Christmas, people may go to the theater to see the Pantomime (a family musical), which traditionally opens on this day. Some also take the day to visit friends.

Easter is also a big holiday weekend. Many Jamaicans go to church on Good Friday; one holiday superstition involves leaving an egg white out in some water on Holy Thursday and seeing what shape it takes overnight. For instance, if it sets like a ship, travel is in your future.

The most popular Easter tradition is eating bun and cheese. The bun is shaped like a loaf and filled with raisins, cinnamon and other spices, sliced sandwich-style with a piece of cheese in between. Easter is also the start of the annual carnival, featuring costumed parades and bands of calypso and soca musicians. Easter Monday (the day after Easter) will find Jamaicans at the beach or having a cookout.

Jamaicans celebrate a slew of secular holidays as well. August 1 marks Emancipation Day, the day that slaves were set free in the British colonies in 1838. This is celebrated with the reading of the Emancipation Declaration in town centers [source: Government of Jamaica]. August 6 marks Independence Day, when Jamaica received its independence from Britain in 1962. The days around the two events are filled with cultural exhibitions in music, dance, poetry and art, beauty contests, float parades and street dancing.

Though Jamaican weddings tend to be similar in style to those of other Western countries, one unique feature is the wedding cake, a dark rich cake that is always made with raisins and prunes soaked in wine or rum, and iced in white frosting. Any leftovers are cut up and sent to those who could not make the reception. 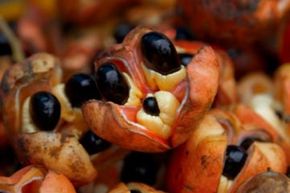 Jamaican food tends to be on the spicy side and is a mix of African, European and Indian influences. Some food items are world-famous. Take, for instance, jerk chicken, which has graced many restaurant menus internationally. Despite its global popularity, it will never taste the same as it does in Jamaica because it's cooked differently there. The word "jerk" comes from the Spanish word charqui, which refers to dried strips of meat, sort of like beef jerky. In Jamaica, jerk pork or chicken is marinated with a paste of pimento, super-hot Scotch Bonnet peppers and other spices, and cooked barbecue style outdoors on a lattice of pimento wood, which produces a delicious smoky flavor. The method of cooking is said to have originated with the Taino Indians thousands of years ago [source: The Kitchen Project].

Another internationally famous food is the patty, the hamburger of Jamaica. Patties are shaped like turnovers and filled with spicy ground beef -- although chicken, lobster or vegetarian patties are also common. The turnover pastry was introduced by the English while East Indians added cumin and curry flavors to the beef. Patties are usually eaten at lunch time in Jamaica with a soda or juice and are best consumed a few minutes after they are baked.

The national dish of Jamaica is ackee and saltfish, a marriage of two very unlikely ingredients. Ackee -- a relative of the lychee -- was brought to Jamaica from West Africa as food for slaves by Captain Bligh (of "Mutiny on the Bounty" fame) in the late 18th century. Jamaica is one of the few places where this nutritious plant is eaten -- perhaps because the ackee becomes poisonous if the fruit is forced out of the red pod rather than allowed to open naturally [source: University of the West Indies]. Saltfish (dried salted cod) from Canada was commonly given to slaves to eat because it was cheap back then [source: Tropic Isle Living]. Ackee, which looks like scrambled eggs when cooked, combines with saltfish -- and perhaps some tomato and salt pork or bacon -- for a hearty Sunday breakfast.

Jamaican cuisine may be world-renowned, but did you know that Jamaica is also famous for its coffee? It's true: Jamaican coffee is some of the finest and most expensive in the world. The best is grown on the slopes of the Blue Mountains and is considered a very mild, balanced blend. Most of it is exported to Japan, but buyers in the U.S. can expect to pay about $50 for a pound of the stuff [source: Porto Rico Importing Company]. 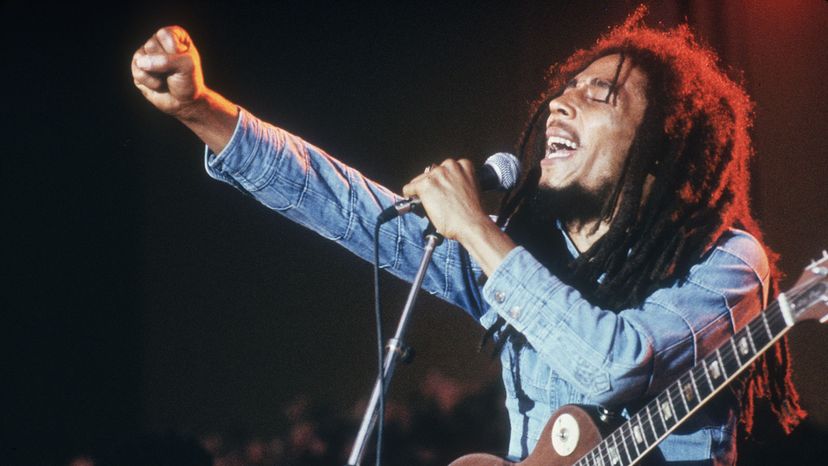 While African-based drumming, chants, work songs and folk songs have existed since slavery times, what the world thinks of as Jamaican music dovetailed with the wide availability of radio, carrying rhythm-and-blues music from American stations to the island, where it mixed with local music styles to create new forms of expression.

Ska was the first internationally known Jamaican music genre. Ska used American-style R&B but Jamaicanized it with banjo strumming, drumming on the offbeat and a horn section [source: Meschino]. You can hear the fast syncopated beat in songs from bands like Madness and No Doubt.

The beat began to slow down in the mid-60s (some said that the hot summer was of 1966 was the cause!), giving way to rock steady, soon to be followed by the even-slower paced reggae [source: BBC]. Reggae had deeper bass lines, African-style drumming and lyrics that focused on politics and praises to "Jah" rather than partying. Bob Marley is the best-known reggae musician and indeed, the best-known Jamaican.

So how did Bob Marley become so famous? "Marley was a musical genius for a multicultural age," opined Christopher John Farley of Time magazine, which named Marley's "Exodus" the best album of the 20th century. Marley was embraced by herb-loving college students as well as by oppressed people in Africa, the Caribbean and all over the world.

Marley's death in 1981 seemed to signal a change in musical styles as well. Reggae (soon to be called "roots reggae") gave way to dancehall, a stripped down version of reggae with an emphasis on producer-created sounds, very heavy bass lines over which singers sang or "toasted" (talked over the rhythm track) [source: BBC]. Actually, some form of dancehall had always existed in the streets and dancehalls of urban Jamaica when DJs would toast over the hits played on traveling sound systems.

One feature of dancehall is "slackness" -- lyrics focusing on guns, raw sexuality or homophobia. Famous singers include Yellowman, Buju Banton, and Vybz Kartel. Poppified dancehall can be heard on hits from Sean Paul as well as lending flavor to songs like "Fly" by Sugar Ray. Dancehall is currently the dominant style in Jamaica, though some musicians keep the roots reggae flag flying.

Jamaican music has also influenced styles beyond its borders. In the 1970s, a Jamaica-born DJ named Kool Herc began holding parties in the South Bronx where he isolated and extended the instrumental portion of the record ("the break") on his two turntables and toasted on the microphone in imitation of the dancehall style back home [source: Chang]. This was the beginning of rap.

For more on cultural traditions around the world, fly to the links on the next page.

An indigenous religious movement that arose in Jamaica in the 1930s, Rastafarians worship Haile Selassie I, former emperor of Ethiopia, as God incarnate ("Jah"). They tend to reject Western society as "Babylon," embrace Afrocentricity and enjoy ganja (marijuana) as a sacrament. The wearing of dreadlocks is taken from a Bible verse in Leviticus that "priests must not shave their heads." Many reggae musicians, including Bob Marley, embrace Rastafari [source: Religion Facts]. 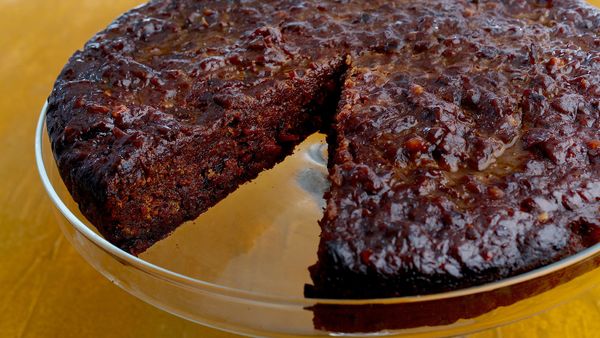 Up Next
In the Caribbean, It's Not Christmas Without Black Cake
Explore More 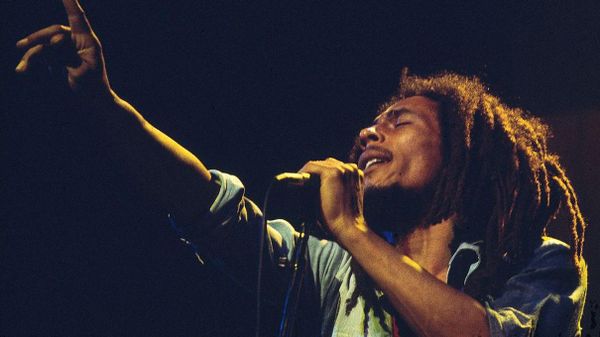 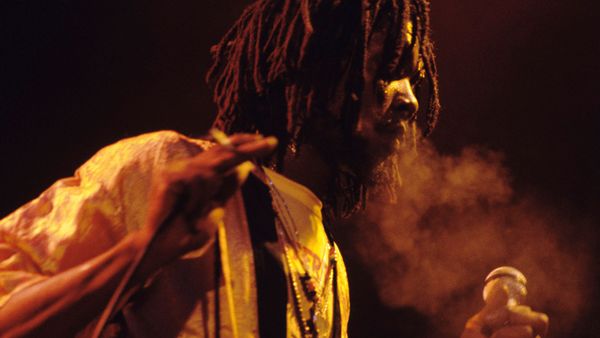 Keep Reading
What Is the Rasta Movement All About?
Explore More