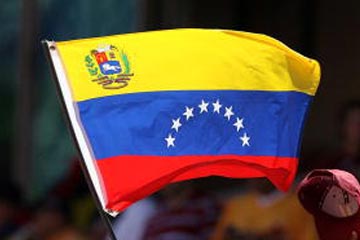 Venezuela's current flag is based on a flag used by freedom fighters who opposed the country's Spanish colonial rule. The stars symbolize the seven provinces of the country at the time it gained independence.
Doug Benc/Getty Images

Venezuela sits in the northernmost part of South America, with the Caribbean Sea forming its northern border. The country of 28 million was home to numerous indigenous people for centuries until 1498 when the first European set foot on its shores -- Christopher Columbus. Spaniards soon colonized Venezuela (so named because the stilted homes built above a lake reminded a subsequent explorer of Venice), and eventually large numbers of African slaves were brought over [sources: Garcia, Geographia]. It was the customs of these three groups -- the native people, Spaniards and Africans -- that blended together over time to create Venezuela's modern traditions.

While these three groups were in Venezuela together, the Spaniards dominated. Customs from the native and African populations were pushed to the side or abandoned. One reflection of this is that Venezuela today is an overwhelmingly Catholic country. Venezuelans are also fairly biased, namely in regard to race and monetary status. Lighter-skinned people are generally viewed as better than those with darker skin, as are those in a higher social class [source: Every Culture].

Venezuela is a patriarchal society, with an emphasis on men showing plenty of machismo. Men are expected to be the wage earners and prove their virility with numerous sexual liaisons. In addition, men openly stare at women in public and shout complimentary remarks, which the women ignore [source: Every Culture]. While women are legally equal to men, they generally earn less and have more social restrictions placed upon them; this is starting to change, though, due to Western influences.

Like several other South American and Caribbean countries, Venezuelans celebrate Carnaval during the three days before Ash Wednesday. The revelry includes parades featuring costumed people, plus parties with lots of dancing and drinking.