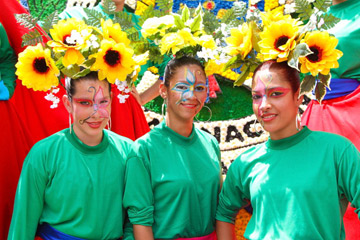 With snow-capped mountains, dense jungles, vast flat lands and gorgeous beaches on both the Atlantic and Pacific coasts, Colombia is a treasure trove of ecological wonders. For many years, however, Colombia's considerable natural gifts were held hostage by civil unrest, powerful drug cartels and homicide rates that were among the highest in the world [source: Frommers].

Colombian traditions are as varied as its topography. From food and clothing to music and dance, Colombian customs have been shaped as much by their region of origin as by the Spanish, Caribbean and African influences brought in by outside settlers. Regional pockets -- beaches on both the Atlantic and Pacific coasts, vast swaths of rainforest in the southern interior, grassy plains (llanos) in the northern interior and breathtaking mountain vistas in the Andean region --kept settlers isolated and nurtured the development of distinct regional traditions.

Therefore, in order to fully understand Colombian traditions, we must first know a little bit about the country's history and how cultural differences evolved among its various geographic regions. In the next section, we'll see how African and Caribbean influences shaped the country's coastal areas, how Spanish colonialism molded culture in the interior and how the customs of Colombia's indigenous population blended with outside influences to create one of the most diverse collections of traditions in Latin America.

Explore the many faces of Colombia on the next page.