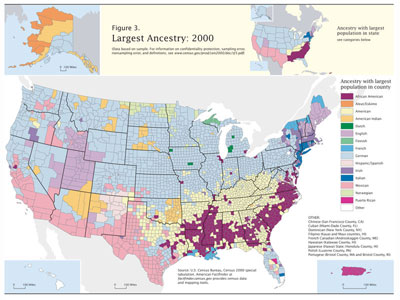 The 2000 census helped to make this chart of reported ancestries in the United States. A shaded color represents the biggest group found in that area. The variety of groups represented shows the many countries from which immigrants have come to the U.S.
Image courtesy United States Census Bureau

­The United States is commonly referred to as a nation of immigrants. From the Mayflower and Plymouth R­ock in the 17th century to Ellis Island and the Statue of Liberty in the 20th, the U.S. has many symbols of its strong immigrant tradition, one closely tied to the promises of the American dream -- justice, freedom, equal opportunity and the pursuit of happiness. The ideas of diversity, tolerance and multiculturalism have become hallmarks of American society because the United States has systems that admit, process and accommodate forei­gn immigrants. In all likelihood someone in your family tree immigrated to the U.S. within the last hundred years, and some of your friends, neighbors and co-workers may be immigrants. ­­

­But despite this long history and growing diversity, immigration remains a controversial­ subject in America. The questions of “who” and “how many” should be allowed into the country can be difficult to reconcile. At the extreme end of the debate stand nativists, who believe that the country should be closed to almost all immigrants. Others believe in a completely open society. But somewhere between these two sides is where most of the debate occurs. In this article, we’ll explore some aspects of this debate while also learning how the immigration process works, how government agencies manage immigration and what terms like “illegal alien” and “permanent resident” really mean. And although immigration is a global process that affects every country in the world, for the purposes of this article, we’ll focus on how immigration works in relation to the United States. 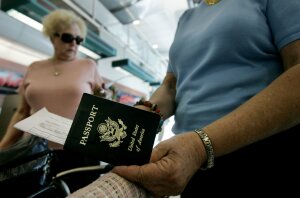