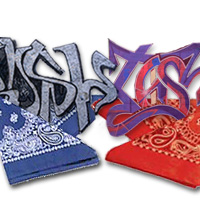 According to a 2005 report by the Department of Justice, there are at least 21,500 gangs and more than 731,000 active gang members in the United States.
HowStuffWorks 2007

Gang violence is a problem in every major city in the United States and membership is on the rise. According to the Department of Justice's 2005 National Gang Threat Assessment, there are at least 21,500 gangs and more than 731,000 active gang members. While gangs are less prevalent in rural areas, in major cities, gang violence is responsible­ for roughly half of all ­­homicides. ­ Gangs are also becoming more savvy, using computers and other technology to commit crimes [ref].

Gathering accurate statistics on gangs and gang membership is difficult for a number of reasons. Gangs obviously don't keep official records of their membership. Some people hang out with gang members, but aren't actually in a gang themselves. If someone "runs with" a gang, but hasn't been initiated yet, is that person a member? Who do you count when compiling your statistics?­

It's also important to consider the source of the data. If a police officer asks a gang member, "Are you in a gang?" chances are the gang member will say no, knowing that police place extra scrutiny on known gang members. Some youths may claim gang membership around other teens to seem tough, and gangs might inflate membership numbers to make their gang seem more powerful. Police departments don't always report gang statistics accurately, either. Federal grants for fighting gang violence can give departments incentive to exaggerate gang numbers, while some departments deny having any gang problems at all to appease the public.

The National Center for Juvenile Justice used a combination of police department reports and self-reporting to compile the ­Juvenile Offenders and Victims: 2006 National Report. They estimated that 49 percent of gang members were Hispanic, 37 percent were black, 8 percent white, 5 percent Asian and 1 percent had another ethnicity. They also found that gang membership is not as prevalent among youth as some fear — between 1 and 2 percent of children ages 10 to 17 were gang members, although the percentage spikes when only "at-risk" youth are counted. Those that did join gangs didn't stay long, with the majority remaining in the gang for less than a year.

Why Do People Join Gangs?

There are many possible reasons for someone to join a gang, but four primary reasons seem to describe those of most gang members:

Drug use is an underlying factor in all of these reasons. Not only does the sale of illegal drugs drive the profits of street gangs, they also create many of the conditions that lead to gang membership.