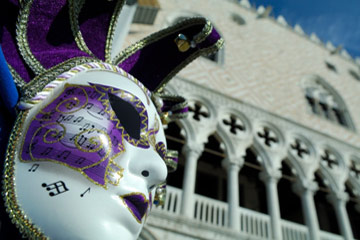 A carnival mask on display at the Piazza San Marco in Venice.
Thierry Grun/Getty Images

Italian tradition is filled with festivals celebrating saints, holidays and important events in Italian history. In Venice they celebrate Carnivale di Venezia, a two-week party in early spring. It is marked by parties, parades, live performances of music and, most famously, masquerade balls. Masks are worn throughout Carnivale, ranging from simple half-face masks to elaborate full-face masks called bauta. Although family-friendly events are part of the celebration, the masks and the party atmosphere give Carnivale a reputation as a place where "anything goes."

Scoppio del carro is an Easter festival held in Florence that marks the triumph of the First Crusade. Mimicking the supposed events of the Crusade (and blending the holiday with a celebration of Saint John), celebrants build a magnificent cart in the shape of a tower, then they have oxen pull it through the city. In a square outside the cathedral called the Piazza del Duomo, the oxen are led away and Easter mass is held. At the mass's climax, someone lights fireworks attached to the tower by wire. Those fireworks ignite other fireworks which cover the tower, which soon catches fire in a shower of colored sparks and explosions. The tower will eventually burn to the ground.

Every September 3, the city of Viterbo celebrates La Macchina di Santa Rosa in thanks to Santa Maria Rosa, whom they credit with saving their city from disease in the 1600s. This tradition also involves a tower, although it isn't burned -- instead, local men carry the five-ton behemoth. It takes 100 of these facchini (men chosen specifically for the job) to haul it through the city, and they train throughout the summer to make sure they can do it. The tower itself is created through a design competition, with a statue of the celebration's patron saint on top.

Ferragosto is an Italian summer holiday. Traditionally, it was simply a period of relaxation; in fact, Italians used to take the entire month of August off as a vacation. The Catholic Church eventually incorporated the holiday, making it into a celebration of the Virgin Mary. Modern Italians typically celebrate it as a national holiday on August 15 (they only get one day off these days). In practice, it bears some resemblance to the American Independence Day, with families enjoying the beach, cooking food together and taking part in other recreational activities.