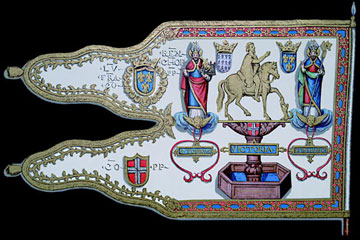 This family crest dating from around 1648 belonged to Louis XII, King of France.
Buyenlarge/Getty Images

Strolling through a shopping mall, you may see a kiosk that specializes in family crests. Likewise, if you've ever researched family history by typing your surname into a search engine or visiting a genealogy Web site, you may have felt bombarded with the plethora of ads promising to help you find the authentic symbol stamping your family tree. In this article, we'll help separate fact from fiction when it comes to family crests.

Before we delve into some of the common symbols emblazoned on crests and how to possibly find those belonging to your forefathers, we need to understand a bit of related history and terminology.

People sometimes refer to a family crest by other names, such as a shield of arms or coat of arms. The terms "family crest" and "coat of arms" have become interchangeable, but they started out with tangible differences, as we'll see later. You may also run across the term heraldry. This term originates from a European custom dating back to the Middle Ages. Heralds, or announcers, would introduce knights at competitions, and spectators could distinguish each knight by the design adorning his shield, helmet and armor. This design was his crest. Medieval illustrations of knights and their horses show that the horses' gear was often decorated with the same design, too [source: Powell].

Think of a crest like a trademark or custom stamp. Crests were passed down by men to their firstborn male offspring, similar to how a man named William Jones might name his son William Jones Jr. In a tradition known as cadency, the father's other sons embellished on this crest to create a semi-original one to represent their own families [source: Powell].

You've probably figured out that very few people with the same last name share a family crest. That was true during the days of feudalism, so imagine how slim the chances are in this era of just one coat of arms representing your entire family. Now, you can tell the kiosk guy at the mall you already know the deal: There's no such thing as one coat of arms for your last name [source: Powell].

But all hope isn't lost. Several legitimate authorities (such the American College of Heraldry in the United States and the College of Arms in the United Kingdom) may be able to help you create or confirm a family crest that you and your children can use.

How to Find Your Family Crest

If you're at least curious about (if not completely intrigued with) genealogy, you may want to know how to find your family crest -- even just for fun. There's a bona fide registry of family crests in the United States, the United Kingdom and Scotland. Not only do these groups preserve databases of registered family crests, they can also offer guidance into researching ancestral arms.

According to the American Heraldry Society, you have to conduct objective genealogical research in order to determine if you have rights to an existing crest [source: American Heraldry Society]. You'll literally have to backtrack to find out if you do. Here's why: Family crests follow the male lineage in most heraldic traditions. That means if you're a male, you would need to prove and document who your father is and whether you have rights to his crest. Then, you would step back one generation and repeat the process. Prove and document who your father's father is and whether he passed on his family crest to your father. Theoretically, you keep repeating the process as far back as you can or care to.

Keep in mind that each country has slightly different guidelines and laws to determine whether someone is entitled to a certain family crest. What's more, some sources estimate that over time, people have designed millions of distinct crests. This means that if you find your family's crest, you may not have a legal right to use it as your own. It also means that you could be weeding through crests for years before you find the one that's authentic.

The Japanese version of a family crest is known as a monsho or kamon, also called a mon. Only samurai or higher social classes have a monsho. If this is your heritage, you can trace your family's monsho by visiting the cemetery where your relatives are buried and looking on the tombstones of those bearing your father's surname. You'll find the monsho engraved on your ancestors' markers.

As you're researching your family crest, you're bound to notice some common family crest symbols. Some that are especially popular among family crests and that also appear on governmental, religious and other cultural coats of arms include the Christian cross; ornate leaves, flowers and trees; and animals like lions, tigers, fish, horses, lizards and birds. You may be surprised to see unicorns and monsters among these symbols, too.

Color schemes and patterns also contribute to each crest's unique design. Even the shield's overall shape -- from round to square and all other variations -- holds meaning. Then, there's usually a motto stamped or engraved prominently on the crest. Each of the elements that comprise a crest work in tandem to represent character traits that the family is known for, such as strength, wisdom, leadership, agility and resilience.

Attaching a crest or coat of arms to one's family history sometimes fuels a sense of pride or belonging. If you take a lighthearted approach to genealogy, you can simply have fun figuring out what a designer was thinking when he created a family crest.

Millions of them exist, but there are elements basic to any crest. The components of a crest almost always include a shield. The shield can rest on a compartment adorned with a motto. Then, there are supporting flanks on each side of the shield to keep it propped up. A helmet rests on top of the shield with a mantle draping the sides and back of it. A wreath (think Julius Caesar-style) perches on the top of the helmet to hold the mantle in place, and then a winglike emblem crowns the whole thing.

As we're learning, family crests are limited only by one's imagination. Although it may be disappointing to find out that the chances of having legitimate claim to a family crest going back just one or two generations are pretty slim, the beauty of it is that these days, anyone can create his or her own family crest. Depending on where you live, you may be able to record the crest or coat of arms you design with a genealogy registry or heraldry authority.

Some symbols on crests represent territories or kingdoms. The mural in the Library of Congress depicting Christopher Columbus' coat of arms, for example, includes a golden castle, which signifies the unification of Queen Isabella of Spain's two kingdoms [source: Library of Congress]. Other designs, such as stripes and colors, stand for an office, title or social status. For instance, bands on Pope Benedict XVI's coat of arms represent "order, jurisdiction and magisterium" [source: Alderman].

Family Crests and Coats of Arms

Locating and displaying a family crest is a serious matter to some people, while it's just plain fun to others. Listening to others talk about their genealogical research, you may be confused by what exactly the difference is between a family crest and a coat of arms. As we learned earlier, the names have become interchangeable. But originally, a coat of arms was the cloth tunic worn over armor to shield it from the sun. Because a knight's battle gear was so prestigious and spoke to all of his achievements, the coat of arms evolved into a status symbol that provided commentary on one's family history, property and profession or occupation.

With so much meaning packed into that design, the crest was a coveted item. But as we've already established, British heraldry rules only allowed a firstborn son to receive his father's crest upon his death. By default, the crest would go to the firstborn grandson of a daughter if the man had no sons. In a number of heraldry traditions, when a couple married, they blended their respective family crests to form a hybrid version. In past cultures where single women were allowed to have their own crests, it was usually an oval or lozenge shape, whereas a man's shield was often shaped like a square.

In certain places, a man could will the rights to his crest to anyone of his choosing. In other countries that have heraldry authorities, a person can petition the agency for the right to bear arms, or for use of the family crest. Ireland is one of them. In France, legal right to bear arms is simply a race for time. Sort of like a copyright in the United States, it's a matter of registering one's crest with a notary or clerk of court before someone else does.

These days, many governments throughout the world have their own crest. These are like individual brands that symbolize their society. The crest is incorporated in that government's flag, currency and official business documents. Also, religious and business organizations may use a crest for their particular logo.

Scholars have found artifacts from ancient Greece and Africa that are emblazoned with symbols representing families. These aren't exactly crests or coats of arms, but they served a similar purpose for their time.