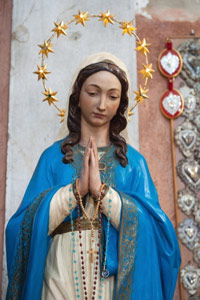 Roman Catholic Italians adorn their homes with religious icons, like this statue of the Virgin Mary on the island of Burano, near Venice.
Marco Secchi/Getty Images

If you know an Italian, chances are that he or she is Roman Catholic. 90 percent of all Italians identify themselves as Roman Catholic, and about a third of them are actively practicing Roman Catholics [source: CIA]. The very origin of Christianity in Europe is entwined with the history of Rome; Vatican City, a sovereign city-state that serves as the center of Roman Catholicism and home of the Pope, sits entirely within the city of Rome.

Some Italian religious traditions have become worldwide traditions. For example, Saint Francis of Assisi reportedly built a reproduction of the infant Christ's manger in front of a church in Greccio, Italy in the 11th century. This tradition of creating a nativity scene outside a church has spread around the world.

Another saint, Saint Joseph (San Giuseppe), figures into a classic Italian tradition that involves food. The legend is that Saint Joseph responded to the prayers of Sicilians and ended a drought with much-needed rain. Italians celebrate St. Joseph's Day, March 19, with a feast in his honor, along with the occasional celebratory bonfire.

The day-to-day practice of Catholicism by Italians mirrors that of many other nations, including weekly church services, observance of religious holidays and obeisance of religious doctrine, especially instructions given by the Pope. However, Italians enjoy displaying the symbols of Christianity, and their celebrations place great emphasis on the saints and the Virgin Mary. Italian homes may have Christian symbols, icons and images of saints placed conspicuously. Crucifixes are hung on walls or displayed in small shrines, and they're also commonly worn on a necklace or rosary.

In the next section, we'll feature Italian traditions that revolve around family events.