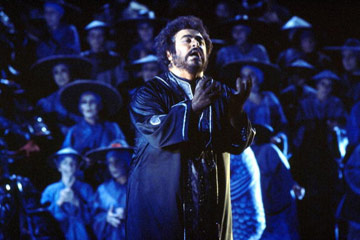 Luciano Pavarotti, one of the world's premier opera singers, performs in "Turandot" at the San Francisco Opera House in 1977.
Ron Scherl/Getty Images

Italy has a lively tradition of music and dance stemming from folk traditions, many of which are based on older forms adopted from neighboring (or invading) countries. Again, regional differences create a lot of variety, so you can find Italian folk music with Celtic, Spanish and even Arabic influences. Performers of Italian folk music use old-fashioned instruments like simple flutes and even a bagpipe-like instrument called the piva.

Opera is a major Italian music tradition, achieving its greatest popularity in the 1800s. In fact, opera was created in Italy, evolving from raucous performances of singing and dancing with exciting stage effects meant to entertain Roman crowds in between acts of the actual play. They were known as intermezzi. The word opera simply means, "A work," and the form involves a distinct style of singing more melodic and dramatic than speech, but not as focused on melody and harmony than other musical styles. The first true opera, "Dafne," appeared in the late 14th century in Venice. Today, many of the best-known opera singers in the world are Italian.

Italian pop music is similar to pop music in the rest of the world, incorporating rock, hip-hop, jazz and electronic dance music. However, Italian pop stars incorporate traditional Italian music into their works as well, such as Andrea Bocelli, who fuses pop music with classical and opera. Italians also love to listen to music made by others of Italian heritage -- thus, listening to music made by Italians is a tradition, whether the music itself is traditional or not. You're likely to hear some Frank Sinatra or Al Martino being played at Italian family gatherings.

The most famous Italian dance is the tarantella. This differs from the wedding dance we mentioned on the last page in that here, a solo performer dances vigorously to a quick, upbeat song, supposedly to "sweat out" the poison of the deadly tarantula. The dance could last for hours, and is quasi-religious in nature.